Dan Kelly with The Ukeladies

Tonight Tash and I met at The Spiegeltent down by the Arts Centre to see Dan Kelly and The Ukeladies. This was our first time in The Spiegeltent, and it is a small and intimate venue to see a show. Shortly after taking our seats near the front Dan Kelly hit the stage and started out solo before being joined by The Ukeladies for the majority of the set. He was quite hilarious with his intros and played some old and new songs. "Drunk on Election Night" was a highlight solely for the vulgar lyrics sing-a-long. Their new single together about global warming, "The SUV Song" can be heard here. They also did an amazing cover of Prince's "Nothing Compares 2 U." Overall it was a very entertaining hour plus set and I would definitely recommend checking out Dan if he's playing a show near you.
Posted by Nicole at 9:52 PM No comments:

Crowded House Karaoke with The Basics

Last night was the convergence of two of my favorite things- Crowded House and The Basics! After the success of their Beatles Karaoke night, they decided to tackle the songs of Crowded House. Tash, Mary and I met at The Empress Hotel for dinner before taking our seats for the show. The premise of the night was simple- choose a Crowded House song from the list and The Basics would be your backing band. The boys started the night with "Weather With You" and then volunteers started to come up on stage. Some versions were better than others, and the guys probably could have practiced some of the songs a bit more as the instrumentations are not as easy as they might seem.

Mel joined us a few songs in and during the intermission dobbed me in to David the keyboard player, so I ended up signing up to sing "Mean to Me" with another girl. We were the third ones called up on stage and thankfully the song went pretty well! Even the band said we did a good job. As the night went on more people started to volunteer to sing. We had a few repeat songs but overall it was a fun night and the boys played "Not The Girl You Think You Are" and "Distant Sun" on their own before closing with "Don't Dream Its Over." I had a quick chat with Wally after the show and then it was off to home. I still can't believe I got up on stage and sang with The Basics! 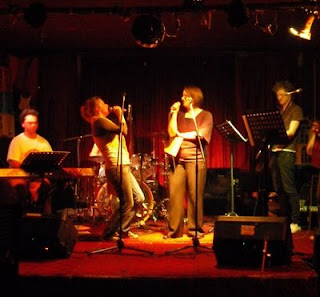