It is nearly the end of another year, which means it's time for my annual compilation of my favorite Australian songs from 2018. As in previous years there is a mix of different genres, with this year's being a bit more of a mellow track list. Hopefully you will enjoy it and maybe discover an artist you weren't aware of before.

Posted by Nicole at 9:52 PM No comments:

To Jesus, Thanks For Everything! Jinkx and DeLa 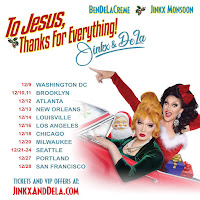 I was fortunate that while I was home I got to attend the holiday-themed show To Jesus, Thanks For Everything! Jinkx and DeLa by two of my favorite RuPaul's Drag Race alums Jinkx Monsoon and BenDeLaCreme. My cousin Leilani joined me and we first had a yummy Mexican dinner at Papito Hayes before walking to the Herbst Theatre at the San Francisco War Memorial for the last show of this tour.

As Ben and Jinkx pointed out, December is a very popular month for drag-themed holiday shows. This one was written by both of them and played on their drag personalities, with the upbeat DeLa being a Christmas tour de force while Jinkx was dragged along for the ride, drinking side of stage and trying to get DeLa to acknowledge her Jewish heritage. There were many musical numbers and costume changes throughout the show, with my favorite being DeLa as a Christmas tree and Jinkx in a Star of David blue dress with menorah strapped to her back.

The show touched on a lot of different topics in a really intelligent way, including religion, politics, cultural appropriation, and toxic masculinity and misogyny. It was all very funny and we were laughing out loud throughout, especially when the tables turned and Jinkx had to motivate a despondent DeLa to finish the show. I also enjoyed the clips of DeLa's attempt to create a Rudolph-like stop motion animation that were interspersed through the evening.

I am so happy I was able to go to this show, and finally get to see DeLa perform live. I hope that both them will bring either their solo shows or do one together in Australia in 2019.
Posted by Nicole at 11:50 PM No comments:

Today was my final day with Leilani and Fiorella so we headed down to Santa Cruz to wander around. Our first stop was the Santa Cruz Museum of Art & History where they had a big toy train set with multiple tracks set up in the lobby for kids to play with. Fiorella enjoyed controlling the trains, particularly the Disney themed one.

Next we went to the Santa Cruz Beach Boardwalk, which I haven’t been to in many years. It was such a beautiful winter day that we sat down on a bench by the beach to eat some lunch in the sunshine. Then we walked around the boardwalk to take in the sights and sounds of the games, roller coasters and food stalls. Fiorella really enjoyed watching people go by on the roller coaster cars. We stopped and had some sweet and savory crepes before calling it a day. 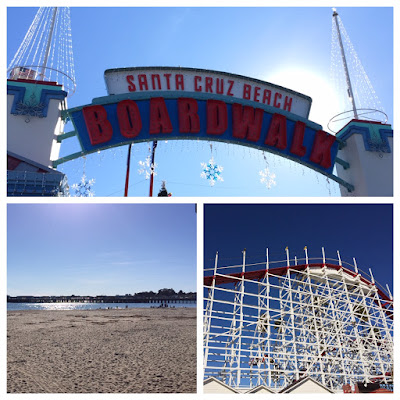 Posted by Nicole at 5:44 PM No comments:

The Roaring Camp Railroads in Felton take you back in time with its recreated 1880s logging camp and steam engine trains. This morning Lei, Fiorella and I rode the Redwood Forest Steam Train up to Bear Mountain and back. The nearly 90 minutes trip in the open air passenger cars takes you on the narrow-gauge tracks that wind through the redwood groves to the summit. A conductor narrates the journey, telling everyone about the history of the railroad and the forest.

It was amazing to be so close to the redwoods as we wound up and down Bear Mountain. The steam from the train created some great shots as the sunlight shone through the forest. We were also very lucky to have chosen the 11am train as the wind picked up and when we returned to Roaring Camp they announced the subsequent trains were cancelled. 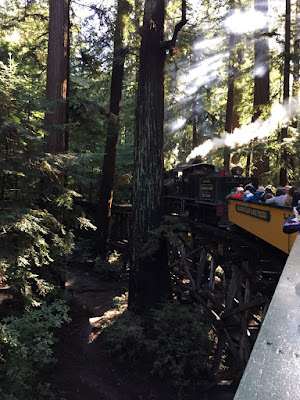 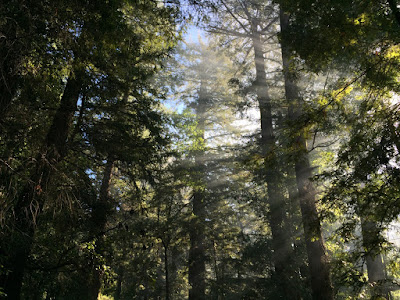 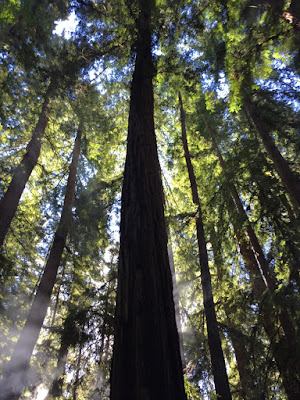 Afterwards we stopped at the Italian restaurant Casa Nostra in Ben Lomond for lunch. While the name and logo were slightly unfortunate, the food was delicious. I had a chicken parmigiana with roasted vegetables.
Posted by Nicole at 8:07 PM No comments: 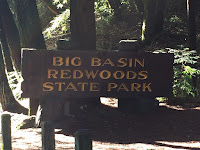 Last night I drove down with my cousin Leilani and her daughter Fiorella to their new home in Boulder Creek, which is located in between San Jose and Santa Cruz. It’s a cute little town surrounded by redwoods, so it was appropriate that today we ventured to the local tourist attraction, Big Basin Redwoods State Park (which thankfully was open and not impacted by the federal government shutdown).

The park was established in 1902 as the first ever state park in California. It features different trails going through ancient old-growth redwoods and other vegetation spread across over 18,000 acres in the Santa Cruz Mountains. We wandered around the Redwood Loop Trail, which is a flat half mile trail that loops around some of the significant trees in the park, including the Mother and Father of the Forest. The trail has different sign posts along the way where you can read the trail brochure to learn about the forest environment and adaptation of the redwoods to survive. It's a great trail if you have small children or mobility issues.

Here are just a few of the many photos I took while we walked around the park: 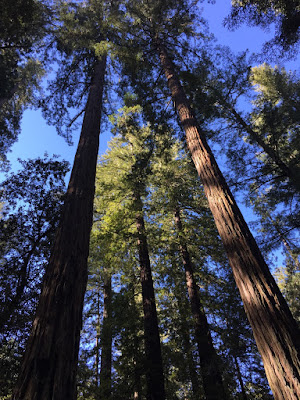 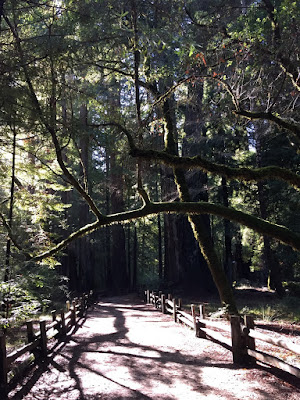 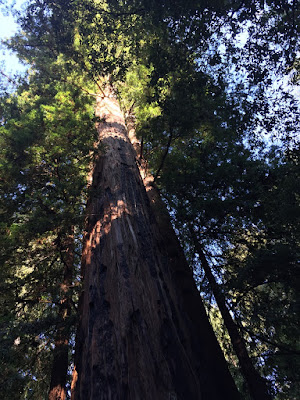 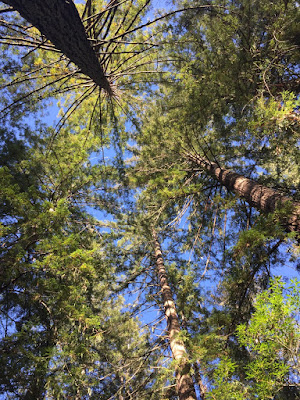 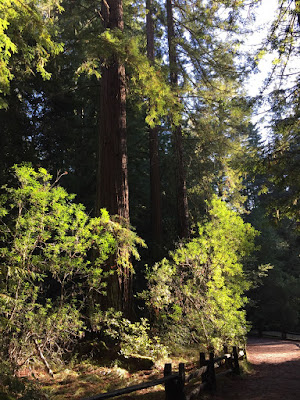 Posted by Nicole at 8:44 PM No comments: 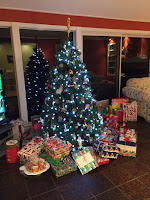 Happy holidays from the USA! I arrived home on 16 December and have been busy finishing up Christmas shopping, catching up with family and friends, and baking up a storm for tonight’s annual Christmas dinner. This year it was a full house with my aunt and cousins, and my brother and his family (including in-laws).

We started with hors d’oeuvres of cheese and crackers, grapes, olives and Camembert cheese and cranberry sauce filo bites. My cousin Leilani and I also enjoyed a few cups of mulled cider, as is tradition.

Due to the number of people, dinner seating was split between the dining room and kitchen table. Leilani and I were on kid wrangling duties with Lei’s daughter and my niece and nephew. For dinner we had a buffet set up in the kitchen with pear and walnut salad, bread rolls, roast turkey breast, stuffing, cranberry sauce, green beans, scalloped potatoes, and tamales. It was all very yummy. 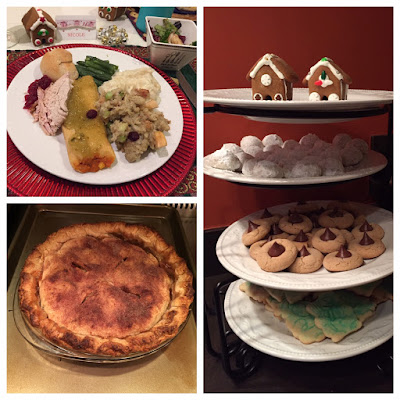 After opening presents (and there were a lot of them around the tree) we had dessert. I made mini gingerbread houses, sugar cookies, snowball cookies and apple pie. We also had Belgian mini cream puffs and my sister-in-law made peanut cookies with Hershey’s kisses. Everyone was very full and a lot of dessert was taken home for eating in the coming days. It’s always nice to be able to spend the holidays with family, especially with the younger ones.
Posted by Nicole at 11:21 PM No comments:

The Breeders- All Nerve Tour 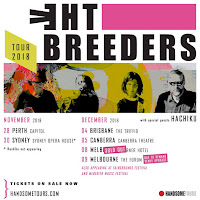 Tonight was The Breeders second sold out show in Melbourne, this time at The Forum. They are touring in support of their latest album All Nerve, which features the early 1990s Last Splash line up. Opening the evening was Melbourne-based four piece band Hachiku, who played a fantastic set of dreamy indie pop music.

It was quite surreal to finally get to see The Breeders play live for the first time after all these years. They started their set with "Saints," which was one of many tracks played off Last Splash, an all time favorite album of mine. Other songs from that album included "No Aloha," "Divine Hammer," "Do You Love Me Now?," "New Year," the monster hit "Cannonball" and the country-tinged "Drivin' On 9" with Kelly Deal doing the violin solo vocally. They also did a few songs off of the 1990 album Pod with "Fortunately Gone," "Glorious" and "When I Was A Painter."

Of course the set also featured tracks off of All Nerve, with highlights being "Wait In The Car," "Walking With A Killer," "Skinhead #2" and "Howl At The Summit," which featured Courtney Barnett and Hachiku on vocals for the chorus. Courtney also came out to play guitar on "Off You." They finished the main set with The Pixies' track "Gigantic," and then for the encore started with a Guided By Voices cover before playing "I Just Wanna Get Along." The show nearly closed with the slow track "Dawn: Making An Effort," but the band came back out on stage and finished the night with the more lively "Iris." All in all it was a fantastic evening, and seeing Kelly Deal singing up on stage just brought back so many memories of all the great female led 1990s alternative bands that I listened to in high school.

Here's the video for "Spacewoman"

Email ThisBlogThis!Share to TwitterShare to FacebookShare to Pinterest
Labels: Hachiku, music, The Breeders

I have spent the past two Tuesday nights at the Northcote Social Club for tapings of Season 3 of The Songroom. While Jess McGuire has returned as host, Kris Schroeder and Tim Heath from The Basics are now overseeing things from behind the scenes. The new house band features Brett Wolfenden on percussion and Benji Miu on guitar. As with the previous seasons, veteran and newer artists come together on the day of the show, and each person gets to play two originals and two covers as they take turns singing in the round.

27 November
Brett and Benji came out first and played a couple instrumental versions of songs to warm up, including Chris Issak’s "Wicked Game." Jess McGuire then introduced each of this week's guests one by one: New South Wales singer-songwriters William Crighton and Melanie Horsnell, and Melbourne hip-hop artist Sirak Abu. The magic of The Songroom is how everyone plays on each other's songs and the unexpected things that can happen. William Crighton decided to change songs last minute, and played his song "Fire In The Empire" about a massacre of Aboriginal people on the land he had been camping on. As a response to that song, Melanie Horsnell switched up her next song and played "Sugar And White Man" about the stolen generation and loss of culture. It was an amazing moment to hear those two songs back to back. There were also some great covers with Melanie doing Edith Piaf's "La Vie En Rose" and William singing Leonard Cohen's "Bird On The Wire" and Neil Young's "Roll Another Number (For The Road)," which finished off the night.

4 December
This evening's guests were Melbourne music royalty Dave Graney and his long-time partner Clare Moore, and the band Rudely Interrupted, which features Rory Burnside on lead vocals. It was quite an upbeat show with lots of humorous moments both through the song lyrics of Dave and Clare's songs and Rory's stories. Highlights included Clare Moore's "A Lot To Drink About," Dave Graney's "Apollo 69" (which is from my favorite mid-90s Graney era), and Rudely Interrupted's "No Goodbyes." There were also some interesting covers, with Clare playing John and Beverley Martyn's "Auntie Aviator," Dave doing The Rolling Stones' "Time Waits For No One," and Rory playing Modern English's "I Melt With You." They all finished the evening playing the Rudely Interrupted track "Calculus & Tea."

Here's The Songroom episode featuring Gotye and Monty Cotton, which was taped in late December 2016 (see if you can spot me in the crowd):