After the success of last year's sparkling wine tasting tour Leilani and I decided to hit the road again to try out some new places.  Our first stop was Cornerstone Sonoma which is a bit of a one stop shop for artisan shops, wine tasting, sculptures and food.  We began with a walk around the grounds and through the Cornerstone Gardens, which feature designs from landscape architects and artists.  Some of the sculptures and installations were fantastic, and there was a lot to explore.  Here are some of my favorite pieces: 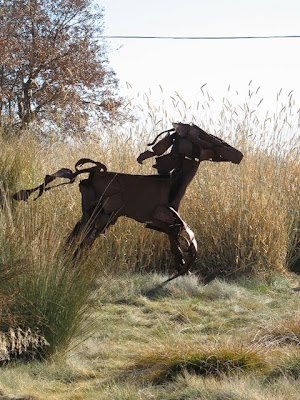 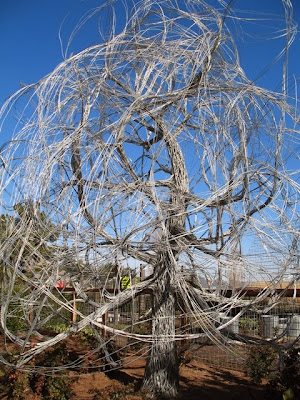 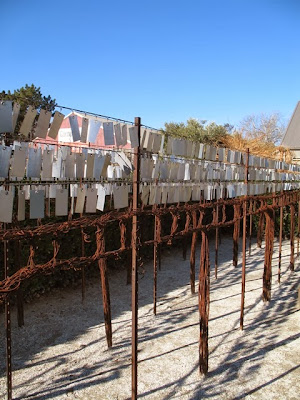 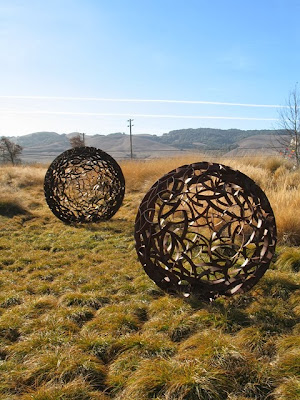 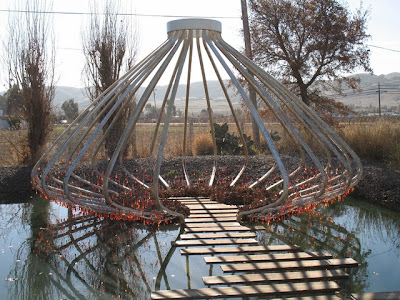 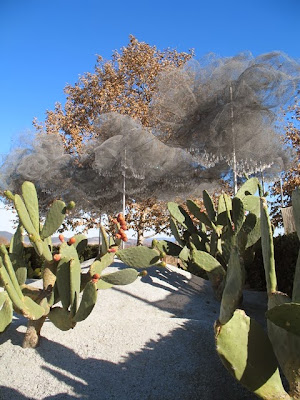 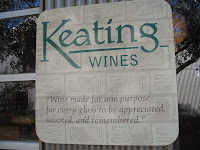 We stopped for our first wine tasting at Keating Wines.  Their tasting menu included 5 wines:
- 2009 Merlot
- 2011 'Montecillo' Zinfandel
- 2011 'Buchignani' Zinfandel
- 2010 'Montecillo' Cabernet
- 2010 'Georges III' Cabernet
Of the five I liked the Montecillo Zinfandel the best.  It was also good to compare different versions of the same wine in the tasting. 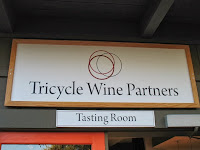 After all that wine tasting I needed some food so we went to have lunch at Park 121.  We shared a kale salad, with Lei ordering a burger while I got the salumi sandwich with mozzarella and roasted bell peppers.  It was just what I needed to absorb all that wine I had already drunk! 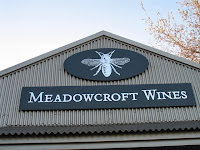 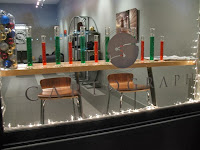 We then hit the freeway for our final stop of the day in Healdsburg at the new tasting room for Cartograph.  Lei had met our server previously as they have mutual friends.  We sampled 5 wines here:
- 2012 Rosé of Pinot Noir: Russian River Valley
- 2012 Floodgate Vineyard Gewürztraminer, Russian River Valley
- 2011 Anderson Valley Pinot Noir
- 2011 Russian River Valley Pinot Noir
- 2011 Floodgate Vineyard Pinot Noir, Russian River Valley
The Gewürztraminer was quite an interesting wine as it didn't taste too sweet. Of the Pinot Noirs I liked the Anderson Valley one the best.  After we finished tasting we took a bit of a walk around the square in downtown Healdsburg before heading for home.  It was great to be able to sample a wide variety of wines throughout the day, especially reds as I usually don't drink them.
Posted by Nicole at 10:59 PM No comments:

Once again I made an indie Australia sampler CD for my cousins as a Christmas gift.  This year's mix is fairly upbeat and features a few 2012 songs but mostly ones from 2013.  There are some old favorites as well as bands I discovered this year at live shows.  Happy listening!


3. The Good China - "You Looked Better A Brunette"

Posted by Nicole at 5:56 PM No comments: 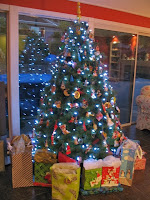 Last night my parents hosted their annual Christmas dinner at the house.  My aunt and cousin Leilani came, as well as my brother, sister-in-law, niece and nephew.  This is the first time James has made it to a Christmas dinner in years since he's usually working, so it was extra special.  We had a bit of an antipasto platter for hors d'oeuvres as well as my favorite drink- mulled cider.  It was good to catch up with Chris and Lei and celebrate my aunt's retirement.  When the kids arrived we had the fun task of wrangling Kylie away from the Christmas tree as she was going after the ornaments (my Mom was smart to put the soft ones at the bottom of the tree).  Logan was very silly and running around but settled once we all headed into the dining room for dinner. 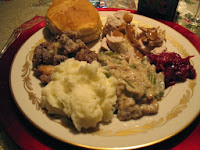 This year my Mom made a Christmas version of her Jell-O salad with a layer of lime Jell-O and pineapple on the bottom, sour cream, then a top layer of raspberry Jell-O with raspberries.  For the main course we had biscuits, roast turkey, stuffing, mashed potatoes, green bean casserole and a cranberry and apricot chutney.  It was all very delicious.  Lei brought us a red and white wine for dinner as well.  The kids were very well behaved as we ate our meal.  After finishing we headed back into the living room to open presents (I was impressed by Logan's patience in waiting so long) and then it was time for dessert.  I made pumpkin pie and snowball cookies and Mom made these lemon and cranberry pie bars.  We were well beyond full by this point but that's always part of the family gathering- good conversation and lots of food!  I'm glad I was able to be home this year to celebrate with everyone.
Posted by Nicole at 11:04 AM No comments:

For a bit of art and culture today my Mom and I headed into San Francisco to see two exhibitions that are currently on at the de Young Museum.  The first was The Art of Bulgari: La Dolce Vita & Beyond: 1950 - 1990.  Showcasing around 150 pieces and various sketches from the Italian jeweler Bulgari, it is interesting to see the evolution in design of the jewelry as it matches the fashions and trends of the decade they were made in.  They used diamonds, semiprecious stones and even coins at one point to create some colorful necklaces, earrings and brooches.  The snake designs from the 1960s were quite interesting, as well as the pieces that used to be in Elizabeth Taylor's collection.  If you are a fan of jewelry, you should definitely check out the exhibition before it closes in mid-February 2014.

Next we went to see David Hockney: A Bigger Exhibition, which is spread across two floors of the de Young Museum.  This exhibition showcases the British artist's prolific amount of work since 2002, including nearly 400 portraits and landscapes done on a wide range of media such as watercolor, oil paintings, charcoal drawings, iPad drawings and digital movies.  His landscape work is particularly impressive as he visits places in different seasons throughout a year to record the transitions of what they look like, often using multiple pieces of paper/canvas and aligning these parts together to form the whole picture.  His multi-camera digital movies of the four seasons at Woldgate were quite striking to look at as they surround and engulf you on the assembled screens on four walls in the exhibition.  I was also quite interested in his use of the iPad for drawing, and that process is shown as well and fascinating to watch.  The exhibition is only on for another month, so get down to the de Young to see it if you are in San Francisco (or at least watch this report from PBS Newshour about the exhibition, which includes an interview with Hockney).
Posted by Nicole at 6:45 PM No comments:

The Word Of The Day Is Delay

After only being back from Africa for two months I wasn't exactly looking forward to another day of travel and long haul flights.  However, how could I say no when my parents asked if I would come home for the holidays (and that they would pay for my airline ticket)?  I began my journey on Air New Zealand with a Melbourne to Auckland flight.  Since last year they have installed self check-in for international flights which meant I wasn't standing in a line for an hour and got through fairly quickly.  Unfortunately the flight was delayed for around 45 minutes due to the knock-on effects of an earlier power outage to the control tower in Melbourne.

As we arrived in Auckland I learned that there would be a 3+ hour delay to the Auckland to San Francisco flight due to mechanical issues with our original plane, which they were replacing.  This isn't what you really want to hear when you are about to embark on a 12 hour flight.  In any case, I killed time in Auckland airport and Air New Zealand did give us food vouchers, so at least I didn't go hungry.  We finally left Auckland at 10:45 pm and made up a half an hour in the air.  I entertained myself on both flights with my usual eclectic choices in movies to watch: "We're The Millers," "The Way Way Back," "The Internship," "Frances Ha" and "Mr. Pip."

On arrival at SFO I zipped through customs, but then there was an issue at baggage claim with a door that jammed and it took nearly an hour for my luggage to come out.  I really felt for the people who had connecting flights as a bunch had already been rescheduled due to our delay leaving Auckland.  I was expecting bumper to bumper traffic on the Golden Gate Bridge all the way up the 101 considering how the day was going, but thankfully I made it into Marin with little issue.  It's nice to be back home to see family and friends and celebrate the holidays (especially as I wasn't expecting to be home for Christmas this year).
Posted by Nicole at 8:19 PM No comments:

The Basics- My Brain's Off (And I Like It) DVD Launch 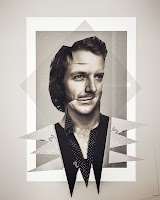 Back in September I was privileged to experience three nights in a row with The Basics.  The first show on 27 September at the Northcote Social Club was filmed and recorded and has now been turned into the concert DVD My Brain's Off (And I Like It), which was launched tonight at a screening at ACMI.  As we entered the theater we were treated to a mini Drumstick ice cream cone and a glass of wine.  Kris, Wally and Tim came out and welcomed us to the screening before the film started.  They joked they were going to launch this at Northcote Social Club (as they had done for the previous live album) but we would have all been gathered around an iPad so they decided to use the big screen and sound system of the ACMI cinema.

Mary and I were a bit nervous about how many crowd shots we would feature in considering we were standing in the front row for this show.  Thankfully Mr. Tim Heath blocked us from the camera's view for a lot of shots, which was a relief although you can see us throughout (and Mary has a close up shot of her singing along to one song).  The concert film itself is fantastic and captures the humor, musical talent and fun of a Basics gig.  You also would never know from the way it is edited that Wally was struggling with his drum kit throughout the night.  The hour and a half concert was edited down to 15 songs, and unfortunately none of the new ones made the cut.  However, there are still heaps of musical highlights in there and we were fully engrossed throughout and even clapping after each song by the end.

After the screening the boys and filmmaker Ryan Gaskett took questions from the audience.  They ended up using this show for the DVD because Wally's vocals from the recording on the second night didn't work, and the video from the third night at the Corner Hotel didn't turn out.  There is also interview footage that wasn't used solely due to the time it would have taken to get the film through the Australian Classification Board (they hinted that maybe one day there could be a director's cut).  There were a few people brought along by friends who were blown away by the film having not known anything about The Basics beforehand.  The best question asked though was probably "Why aren't you the biggest band in the world?"  The boys were very coy when asked a few times about the future of the band and any possible recording, which I thought was slightly odd.  They do have some festival shows coming up into the new year, so they are still playing together at least for the short term.  We will have to wait and see what 2014 holds for the band.

Here's the trailer for the DVD (see if you can spot me) and be sure to order your own copy: