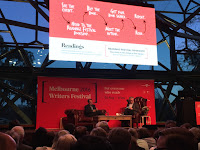 I always find it fascinating how much interest there is in Australia about what is happening in America, particularly in a presidential election year. As part of this year's Melbourne Writers Festival author and staff writer for The New Yorker, George Packer, did an hour long session at Deakin Edge in Fed Square with Australian author Don Watson on the topic America in Decline.

It was a bit of a meandering discussion that touched on George Orwell, the Iraq War, where Packer was a reporter and wrote book The Assassins' Gate: America In Iraq, and eventually got on to the main topic of America in decline, as Packer retold some stories about the lives of people featured in his 2013 book The Unwinding: Thirty Years of American Decline. It is this decline that explains some of what is happening with the presidential campaign this year and rise of anti-establishment candidates such as Bernie Sanders and Donald Trump.

The most interesting parts of the discussion for me were when Packer talked about President Jimmy Carter and how he was the last person to tell the truth to the American people through his presidential addresses. When he lost after one term to Ronald Reagan, no President has been brave enough to be that honest since. Packer also touched on Trump voters and how their issues and concerns shouldn't be dismissed outright and need to be considered by Democrats if they get into office. Afterwards I was able to buy a copy of The Unwinding and get it signed by Packer. As I briefly discussed having to deal with the Trump voters in my family his advice was to continue to engage them using facts and kindness.
Posted by Nicole at 11:19 PM No comments:

It's been many years since I last saw Dave Dobbyn play live so I was excited to catch his Australian tour stop at Max Watt's last night. The crowd was full of Kiwi expats, which was fitting for such a musical icon of New Zealand. The opening act was Jesse Sheehan, who played a solo set on acoustic guitar. Doing songs from his debut album (produced by Neil Finn), Jesse sounded great and got the crowd involved in a couple numbers. For his last song he switched to electric guitar and brought out his fellow Dave Dobbyn bandmates to play along with him.

Dave Dobbyn got a huge reaction from the crowd as he emerged on stage and started off the evening with "Whaling." Touring in support of his new album Harmony House, he played a few songs off of it but mostly delved into his extensive back catalogue. We got to hear Th' Dudes and DD Smash era songs "Outlook For Thursday," " Devil You Know" and "Be Mine Tonight." The Loyal album tracks "Loyal," "Love You Like I Should" and "Slice Of Heaven" had some of the biggest audience sing alongs of the night. The 1990s were represented by "Naked Flame," "The Lap Of The Gods" and "Language" from my favorite album Twist, and "Blindman's Bend" and "Beside You" off The Islander. Dave sounded amazing throughout his over hour and a half set and everyone in the crowd had such a great time as they sang along to every song. For the encore they played "You Get So Lonely" and finished the evening with "Welcome Home." This was such a fun and uplifting show to be at and just confirmed Dave's status as a New Zealand national treasure.

Here's the video for the single "Angelina" off Harmony House:

Posted by Nicole at 6:54 PM No comments:

MIFF- Emo The Musical, Kiki and The Lovers And The Despot

It's the final weekend of MIFF and the last of my films for this year's festival. Last night I started my evening at The Forum to see the world premiere of director Neil Triffett's Australian musical comedy Emo The Musical. Most of the cast and crew were in attendance to watch this film, which originated from Triffett's 2014 Berlinale award-winning short film. It starred Benson Jack Anthony as Ethan, an emo boy who starts at a new high school after getting expelled from his old one. Navigating the different tribes at the school he soon found a group of fellow emos and joined their band Worst Day Ever. Their rivals at school were a Christian worship group, who decided to compete in the same local band competition. Ethan falls for one of their members, Trinity (Jordan Hare) and they try to keep their budding romance a secret. The film is a bit like Glee as the students break into song, with my favorite bit being when Trinity realised that "Jesus was an emo." It was an entertaining film with the ultimate message of being true to yourself. After the screening Lawrence Leung hosted a Q&A with Triffett and his producer. They are hoping to get the movie picked up for distribution more broadly.

Next I saw Sara Jordeno's documentary Kiki about today's New York City ballroom scene. Featuring LGBTQI youth of color, the kiki scene is more organised and socially active than its earlier counterparts captured in the landmark documentary Paris Is Burning. Set to a soundtrack by Qween Beats, the film followed the heads and members of a few different houses as they competed in ballroom and provided a support network for each other. It was a fantastic look at this often marginalised community with some really insightful commentary, political discussion, as well as amazing dance sequences and costumes from the ballroom competitions.

Today I headed to the Comedy Theatre for my final film of MIFF, the documentary The Lovers And The Despot by Ross Adam and Robert Cannan. It tells the true story of South Korean filmmaker Shin Sang-ok and his ex-wife, actress Choi Eun-hee, who were kidnapped in the late 1970s by Kim Jong-il's agents to help bolster North Korea's film industry. While under captivity they gained Kim Jong-il's trust and had the freedom and financing to make whatever films they wanted. As they met the goal of getting North Korean films into international film festivals, it provided Sang-ok and Eun-hee the opportunity they needed to ultimately make their escape. It's a bizarre tale and unfortunately doesn't really cover the aftermath or reaction in North Korea to their defection back to the West.
Posted by Nicole at 10:48 PM No comments:

MIFF- Suzy And The Simple Man and Born In Flames

For tonight's MIFF session I started at the Kino Cinema to see the Australian documentary Suzy And The Simple Man. Filmed over eight years it profiled couple Suzy and John Muir and their life on a farm in rural Victoria, where they grow most of their own food and also raise chickens and sheep. While they dealt with the elements over the years they also encountered personal struggles as Suzy was diagnosed with cancer. It was a touching film about this adventurous couple and how they live a sustainable life driven by their own moral beliefs. After the screening Suzy, John and their co-director Ian Darling did a Q&A with the audience. John, a well renowned adventurer, was wearing a kilt and was quite hilarious and insightful with his answers. It was also good to see Suzy and learn that her cancer is not currently active.

Next I headed out into the rain and down to ACMI for Born In Flames, Lizzie Borden's groundbreaking feminist film from 1983. Set in New York City 10 years after the Social Democratic War of Liberation, women still have to deal with sexism and oppression in the now socialist democracy. Different groups of women, lead by the Women's Army and pirate radio DJs from Radio Ragazza and Phoenix Radio eventually come together and utilise guerrilla tactics to get their message out to the public and force change. It was an interesting film that still holds up all these years later.
Posted by Nicole at 11:49 PM No comments:

To begin my Saturday MIFF session I headed to the Comedy Theatre for the documentary Weiner. Filmmakers Josh Kriegman and Elyse Steinberg received behind the scenes access to Anthony Weiner's return to politics as he ran for the Democratic nomination for New York City mayor in 2013. The film was a fantastic exploration of Weiner's attempt at redemption from his previous sexting scandal, and how the truth always manages to catch up with you in the end. You really felt for his wife Huma Abedin and the campaign staff as scandal broke out yet again with the revelation of "Carlos Danger" and the media circus that followed.

Next I went to the Kino Cinemas for the Australian documentary Destination Arnold by Sascha Ettinger Epstein. The film follows aspiring Indigenous bodybuilders Natasha Lawrence and Kylene Anderson, who dream of making it to the Arnolds bodybuilding competition as it comes to Australia for the first time. Filmed over two years you get to experience the struggles of both women as they try to stay committed to their goals.

My final film for the day was The American Epic Sessions by Bernard MacMahon on the big screen at Hoyts Melbourne Central. This fantastic music documentary featured modern day musicians recording vintage Americana songs on a 1920s Western Electric Scully recording lathe that cuts their three and a half minute live takes directly onto vinyl. With the sessions overseen by Jack White and T Bone Burnett, there were a wide range of artists from different genres invited in to record ranging from Nas to Elton John to Willie Nelson and Merle Haggard. My favorite sessions were with Alabama Shakes, Los Lobos, Auntie Geri Kuhia, Pokey LaFarge, The Avett Brothers and Beck. It was a great exploration of the history of music in America as this first recording machine captured numerous genres and artists on record for the first time in the 1920s and 1930s.
Posted by Nicole at 11:52 PM No comments: 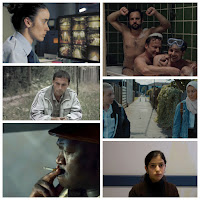 For tonight's MIFF session I began at Hoyts Melbourne Central with International Shorts 2, which featured six different internationally acclaimed and awarded short films. Juanjo Gimenez's Timecode, which won the Palm d'Or for best short film at this year's Cannes Film Festival, was my favorite of the bunch. It featured two parking lot security guards who encountered each other as they changed work shifts. A discovery of her colleague dancing during one of his shift leads to them leaving time coded dance messages to each other.

Next was Balcony by Toby Fell-Holden, which showed the developing friendship between two girls from different backgrounds and concluded with a shocking ending. Maria Guskova's The Return of Erkin showed what happened when Erkin returned to his hometown after 10 years in jail and the reception he received from family and friends. The Silence by Ali Asgari and Farnoosh Samadi was a heartbreaking film about a girl who had to translate news of her mother's diagnosis to her but couldn't find the words. Zamo Mkhwanazi's The Call was about a taxi driver who received some life changing news from a sex worker he'd been seeing. The final film was The Bathtub by Tim Ellrich, a funny film where three brothers tried to recreate a childhood photo for their mother's 60th birthday.

I then headed to the Comedy Theatre for Nicholas Winding Refn's film The Neon Demon. Elle Fanning plays Jesse, a 16-year-old aspiring model who comes to Los Angeles and befriends make up artist Ruby (Jena Malone) and her model friends Sarah (Abbey Lee) and Gigi (Bella Heathcote). As Jesse becomes the next "it girl" with photographers and designers, her new friends become jealous and eventually get their revenge on her. The plot was severely lacking in this visually stylish film that featured both necrophilia and cannibalism (and a lot of blood).
Posted by Nicole at 11:52 PM No comments: