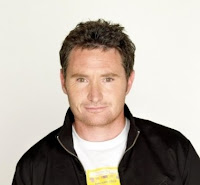 Tonight was the last of my comedy festival shows- Dave Hughes Is Handy. Hughesy is one of the top stand up comedians in Australia and I was thrilled to finally get to see him live. Belinda joined me for his hour plus set and our faces hurt at the end from laughing so much. He covered a lot of local news topics and interacted with the crowd. Overall it was a hilarious night and we definitely got our money's worth.

Here is Hughesy's set from the Comedy Festival Gala this year: 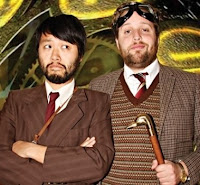 Tonight I organized a group from work to attend Lawrence Leung & Andrew McClelland- Time Ninjas at the comedy festival. This was the first time I had seen either of them perform although they have done solo shows in previous years. The show had singing, dancing, history, props, videos and time travel. At the start of the evening they invited an audience member up onto the stage to play the role of Anne Boleyn. Unfortunately, they accidentally chopped off her head. Luckily though their future selves have built a time machine with Stephen Hawking's wheelchair, so Lawrence and Andy decide to travel back in time to save their audience member's life. Along the way they meet Jesus, Hitler's mother, and the teenage versions of themselves.

I thought the show was good but not as hilarious as I was expecting, although there were consistent laughs throughout the night. Lawrence and Andy have known each other since kindergarten and as a result they have great chemistry on stage and occasionally would break out of character and improvise a bit. You could tell they were having a lot of fun, although I would like to see them perform a tighter show next time.
Posted by Nicole at 10:22 PM No comments:

Tonight Mel and I met up for dinner and then headed over to the St. Martins Youth Arts Centre Randall Theatre in South Yarra to see The Basics. This show was a multimedia extravaganza with live music, video and audio clips to preview their upcoming album "Keep Your Friends Close..." There was also a lot of storytelling about the origins of the songs and some funny stories and videos from being on tour. I don't think I have laughed so much in a long time- the boys were hilarious throughout the night. We got to watch music videos for the latest single "With This Ship" as well as "Like a Brother." Another highlight was Kris singing a heartbreaking version of "All or Nothing" solo on the acoustic guitar. It was great to hear those harmonies again especially in a quiet theatre. The boys say they have recorded about 30 songs so it will be interesting to see what makes it onto the album. I can't wait for it to finally be released as they've been working on it for a couple of years now.
Posted by Nicole at 11:02 PM 1 comment:

MICF: Tim Minchin- Ready for This? 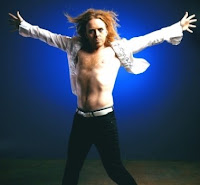 Tonight Tash and I met up at The Forum for Tim Minchin's latest comedy festival show "Ready for This?" Tim made a grand entrance complete with smoke and a fan as he questioned who needs a band. The show itself had more monologue than songs, and covered topics such as American culture, religion and other belief systems, taboo words and science. Tim had a special song for a UK reviewer who gave him a bad review three years ago and did a nine minute beat poem about a hippy at a dinner party. He also has a new anthem about the plight of dancing bears complete with a break-dancing bear. Overall it was a good show and Tim was his rocking self.

Here is a song he wrote for his wife "If I Didn't Have You."

Happy Easter everyone! It's the annual four day weekend here in Australia as Good Friday and Easter Monday are public holidays. Today I got invited over to Danny and Ruth's for hot cross buns and an Easter egg hunt. Hot cross buns are big business here in Australia and we had some very yummy ones from the Flour Mill on Sydney Road. I am having a quiet weekend and enjoying relaxing while trying not to eat too much chocolate.
Posted by Nicole at 2:19 PM No comments: