Support for White Night Melbourne 2016 was announced fairly late by the Victorian Government, which may have had an impact on the number of artists taking part this year at the all night arts festival. Compared to last year it didn't seem there was as much to see, and not having any projections on the Flinders Street buildings was a disappointment. However, there were some real gems that I discovered throughout the early morning hours as I wandered around the city.

The focus on Indigenous storytelling was the real highlight of White Night this year, and these artists had the best light projections of anyone. Federation Squared by Reko Rennie with the Electric Canvas lit up Federation Square with some bright colors and graphic designs on the facade of the building. 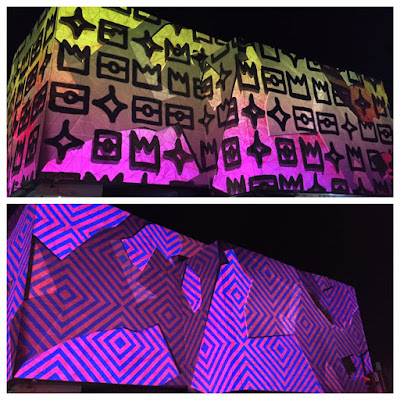 At the NGV was the very powerful Still Here by Josh Muir with Ample Projects. The illustrations, accompanied by music from Emma Donovan and James Henry, tell the story of Aboriginal people in Victoria before and after white settlement. It was a fast-paced visual narrative and the crowd applauded once it finished. 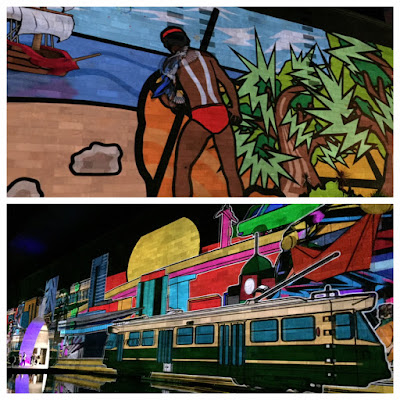 The best work though due to its sheer scale was Pitcha Makin' Fellas and OCUBO at the Royal Exhibition Building. Their piece told the story of the six Aboriginal seasons. It was stunning to watch and great to hear stories told using traditional language as well as English. 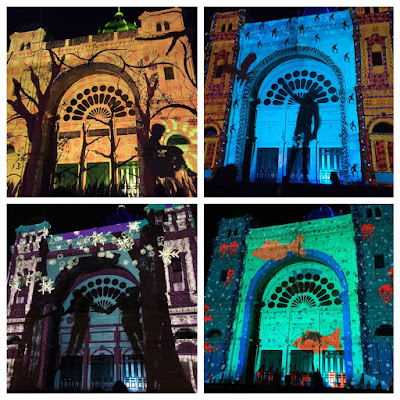 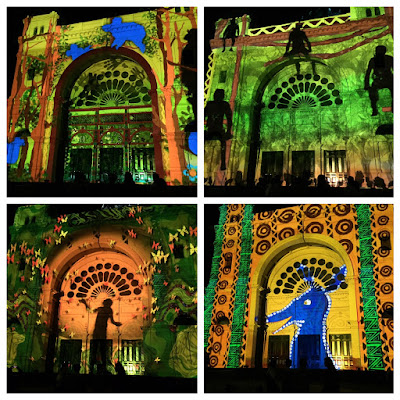 The State Library once again had light projections both outside and inside the building. Landscaping Architecture by Amanda Morgan and James HH Morgan had the front of the library bathed in a kaleidoscope of color. Inside the dome of the La Trobe Reading Room was Ideation by Nick Azidis, Lisa Greenaway, Adem Jaffers and Bentley Dean. Using soundscapes and light projections it celebrated the world's achievements in knowledge. 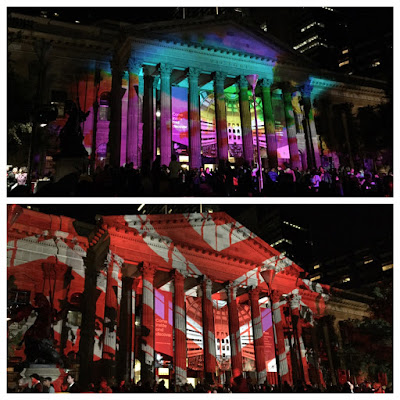 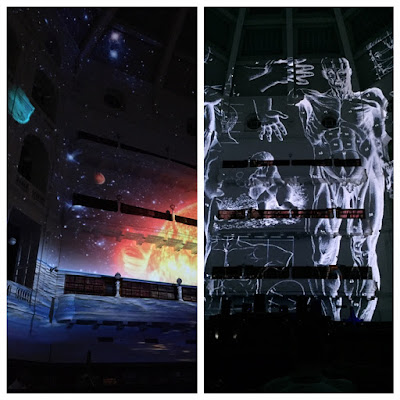 There were many music stages spread across the city that featured bands from different types of genres. With so many things to see throughout the night it's impossible to view everything. Of all the bands playing I didn't want to miss The Harpoons so I made sure to catch their 1:30 am set at the Live on Lonsdale stage. We were treated to a lot of new songs as well as old favorites "Falling For You," "Can We Work This Out," "Unforgettable" and "Ready For Your Love." The crowd was dancing and it was great to hear other people singing along to the lyrics. 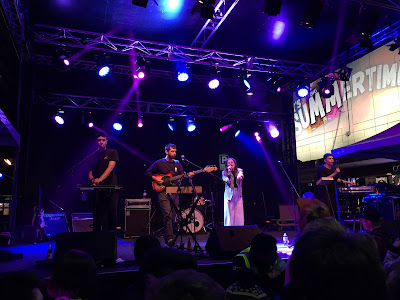 Animals were a feature of some of the pieces at White Night this year. On the Melbourne Town Hall was Golden Monkey by Lisa Roet, which saw a giant gold inflatable monkey clinging to the building. At the Melbourne City Baths was Incubator by Craig Walsh with its 3D animations and projections of creatures swimming around in the pool. 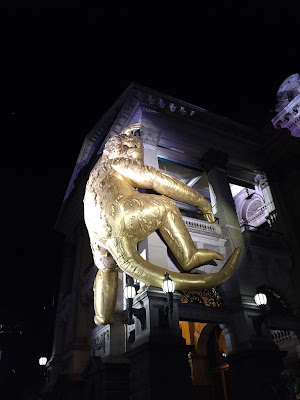 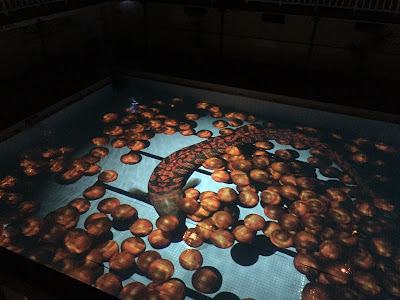 My favorite interactive piece was Neon Laneway by Alana Hoggart and Michael Duncan in Rutledge Lane. This work brought together some of Melbourne's finest street artists with contemporary dancers under the neon glow from black lights. The neon street art, ominous music and dancers really made this the most creative thing I witnessed all evening. 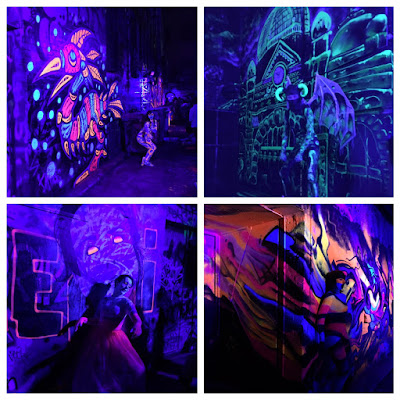 Finally, the hills of the Queen Victoria Gardens were the perfect place to showcase The Dresses by Tae Gon Kim. These beautiful dresses were made of fibre-optic strands that changed color, symbolizing the dresses' history and transformation over time. These were amazing to see in person and another definite highlight of White Night. 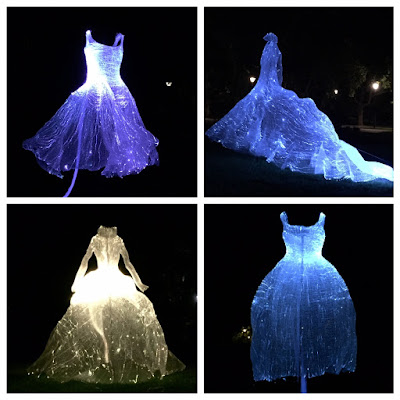 Posted by Nicole at 7:48 PM No comments:

As part of the "Collingwood Open" open-air series the Gasometer Hotel is hosting musical acts through February with the roof to the bandroom open. Tonight was Melbourne's own Oh Mercy in their first show since winning the 2015 ARIA Award for Best Adult Contemporary Album for When We Talk About Love.

I arrived about half way through the opening act Gabriella Cohen, who played a solo set on electric guitar and sounded good. Mary then joined me before The Ocean Party took the stage. They are probably Melbourne's most prolific band, having released an album each year since 2011 and recently putting out the hilariously titled EP Mess & Noise Critics Poll 2015. It was good to see them live again (and once again supporting Oh Mercy) but unfortunately the sound mix was off for most of their set, particularly around being able to hear the keyboards and vocals. They played some new songs along with the album tracks "Guess Work, "Greedy," "Light Weight" (which featured Zac dancing around a bit on the floor as part of a bet), and one of my favorites "Head Down" to finish the set.

It was a full band show for Oh Mercy tonight and they opened with "Can't You Hear My Body (Calling Out To You)." Alex was channelling the Deep Heat era in his very shiny pink lame button down shirt. The set list was mainly songs off When We Talk About Love, with highlights being "Without You," "All Roads Lead To You," a solo version of "Lady Eucalyptus," "Sandy" and "Let Me Be Him." I thought the band sounded good and this was the first show for me where they've really gelled with the songs and made them their own. Tracks from previous albums were also played, including "Keith St." "Drums" (complete with a Burt Bacharach style opening verse), "Deep Heat" and "Lay Everything On Me." Alex said he is currently recording new songs in his bedroom and played "Get On." The band once again did a cover of The Waterboys' "The Whole Of The Moon" and finished the night with "My Man." It was good to see Alex feeling well and being in a more positive head space these days. Hopefully we don't have to wait too long to hear some more of these new tracks he is working on.
Posted by Nicole at 11:47 PM No comments: