Comedian Arj Barker is developing his new show and testing out material in front of a live audience each Monday in the basement of the European Bier Cafe. Belinda and I attended this evening's "Safe Space" performance and it was a packed and intimate show. Arj covered a wide range of topics, including differences between America and Australia (which set up a funny call back later in the show) married life, climate change, space and aliens, and his love of true crime. Demonstrating his years in stand up, he hilariously shot down a couple of chatty audience members and dealt well with a broken glass incident midway through the show.

As we were walking out I had to stop and introduce myself to Arj as a fellow Marinite, and we had a brief chat about Marin and Melbourne. While Arj said to the crowd that the material is not likely to change much from week to week,  I think it would be interesting to attend again towards the end of the run to see how the show has developed.
Posted by Nicole at 11:57 PM No comments:

Dazza And Keif Go Viral In Space WIth Ya Mum 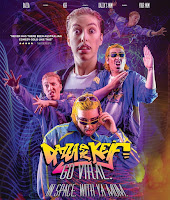 The Melbourne Fringe Festival is currently happening over the next couple weeks, and tonight Sean and I headed to the Trades Hall in Carlton to see the latest show from Dazza and Keif called Dazza and Keif Go Viral In Space With Ya Mum. Dazza and Keif are still living in Dazza's mum's basement and uploading videos of their sick dance routines online in the hopes of going viral. After showing a compilation of them trying to pick up chicks, they came out in glow in the dark tracksuits and did an impressive dance routine to NSYNC's "I Want You Back."

Frustrated with their lack of success on Earth, the boys decide to enter a contest called "Penetrate the Sky" where 20 citizens from around the world will be selected to settle the moon. Unfortunately only Keif made the cut, and the rest of show dealt with the stress this put on their friendship. There were some funny and vulnerable moments from each of them (including a recorder solo from Keif) and a big space-themed dance routine to the Beastie Boys "Intergalactic." While the show was enjoyable, we felt the storyline wasn't as strong as their MICF show earlier this year.
Posted by Nicole at 11:54 PM No comments:

Karen From Finance- Out Of Office

Tonight Sean and I headed to The Melba Spiegeltent in Collingwood for the second of two sold out shows for Karen From Finance’s one woman show Out Of Office. It started with a hilarious video of Karen getting ready for work to Dolly Parton’s “Working Girl.” Karen deals with a lot of misogyny at work, but she loves her job and is the first to arrive and last one to leave each day.

One morning she receives a call from HR and is told that she must take four months leave to use up her entitlements. Karen doesn’t know how to process this news, so she heads off to a bar and one drink leads into a four month bender (again with some hilarious video footage of her adventures). Karen wakes up in an unfamiliar location and has to find a way to get some money in order to get back home in time for work. Logically, she decides to enters a lip sync contest, but things don't quite turn out as expected.

The show was well written and mixed comedy, video clips, lip syncing and some great costumes. I'm really glad that In The Dark supported this tour for an Australian queen, and I hope we’ll get to see more local girls touring shows in the future (which is likely as it looks like Drag Race Australia will be confirmed shortly).
Posted by Nicole at 11:56 PM No comments:

Email ThisBlogThis!Share to TwitterShare to FacebookShare to Pinterest
Labels: drag, Karen From Finance

It has been 25 years since British shoegaze band Ride last toured in Australia, so Belinda and I were really looking forward to tonight's show at the Forum Theatre. Opening the evening was Melbourne four piece Shiva and the Hazards, who attempted to evoke the sounds of previous eras of British rock.

Ride came out to big cheers from the capacity crowd and opened with "Jump Jet" off their new album This Is Not A Safe Place. Their hour and a half set was a mix of newer and older material that all seemed to cohere together despite the decades between some tracks. Of course, it was great to hear those older songs I was so familiar with from the early 1990s, particularly "Seagull," "Taste" and "Vapour Trail" from the Nowhere album, which is an all time favorite of mine. Overall it was a really amazing gig and they were so powerful live, with some songs turning into a wall of sound at points throughout the night. The band seems to be firing on all cylinders even after all these years.

Here's the video for "Future Love"