Last night Clinton and Kevin came to pick me up (saving me walking in the cold) and we headed to The East Brunswick Club to see Cloud Control's sold out show in support of their fantastic new album Bliss Release. When we arrived Richard In Your Mind was starting their set. I thought they were okay but after a while I found the lead singer's voice to be annoying and their songs didn't really draw me in to their performance.

Cloud Control came out onto the smoky stage to enthusiastic cheers from the crowd. Their set list consisted of songs from the new album and their self-titled EP. My favorites for the evening were "There's Nothing In The Water We Can't Fight," "The Rolling Stone," "My Fear #2," "Vintage Books" and "Gold Canary," which received the biggest response of the night likely due to its airplay on Triple J. They finished their set with "Buffalo Country" and we thought for sure there would be an encore but the lights went up and the show was over. It was a bit disappointing as they could have easily played 2-3 more songs. The boys gave me a ride home and I even got a couple pieces of homemade cake to take with me.
Posted by Nicole at 2:51 PM No comments:

Email ThisBlogThis!Share to TwitterShare to FacebookShare to Pinterest
Labels: Cloud Control, music, Richard In Your Mind

The Basics May Residency 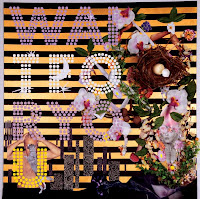 Each Tuesday in May The Basics are playing a residency at Northcote Social Club in support of the release of their new EP Wait For You. The usual suspects (aka Tash, Mary and I) were in attendance and here is a report of what happened at the shows.

May 11
Lachlan Bryan from The Wildes had the opening slot this week. He played a solo acoustic set and told some very funny stories to intro his songs. Unlike for many opening acts, the audience was actually quiet and listening to him sing instead of chatting away. It was good to see some musical manners in Melbourne.

I didn't make it to the first week of the residency, but had heard reports about what a disastrous performance The Basics gave last week, which had me worried. There are obvious tensions within the band, and it seems they had a therapeutic paintball session together over the weekend. This week was better than last, but it's still not quite up to standard. The set list was about half covers and half band songs. Kris played the first few songs wearing a parka (it has gotten cold, but not that cold) and took a phone call on stage from someone in the audience. "Second Best" got an extended heavy jam in the middle of it, and "With This Ship" was played when they pulled the plug on another song. It was mostly Wally singing lead tonight with "Memory Lane," "Just Hold On," and "Rattle My Chain" in the set. They also played the title track from their new EP "Wait For You," which is actually an older song that just hasn't been released before. Some of the covers throughout the evening included The Cure's "Lovesong," Electric Coconut's "Jungle Juice," which then led into Harry Nilsson's "Coconut." We also had a rocking version of The Beatles' "Day Tripper" and an audience request for George Harrison's "Got My Mind Set On You."

May 18
The Basics are nearly back! What a difference a week makes. Although Kris was still a bit off, they were smart this week and had a fan make the set list. We got a lot more Basics this time, which made me happy. They began the evening with the rarely played "Get Me Down," which is a b-side on the latest album and also included on the EP. Other rarities played included "Lovin' Man," "Call It Rhythm and Blues," and "Keep The Door Open." As always it was good to hear "Better" and my favorite "The No. 1 Cause of Death Amongst Youth Today." All the new songs on the EP got an airing with the inclusions of "Wait For You" and "I Could Be Happy" in the set list. Towards the end of the set Kris ran off stage to go to the bathroom, so we got a bit of surf guitar music from Tim and Wally. Covers were kept to a minimum, but they did play Neil Young's "Southern Man," a beautiful a cappella version of Bill Scott's "Hey Rain" and The Police's "Roxanne" for an encore. It's Wally's 30th birthday on Friday, so I hope he has a good one!
Posted by Nicole at 11:44 PM No comments:

Today was Natalie's birthday so she invited some friends and a group of us from work to celebrate with her by having a karaoke fest at Chi Lounge in Chinatown. We had our own private room for four hours at $25 per person, which was used to cover food and drinks for the group. It was an entertaining evening and we had a wide selection of music to choose from. Clinton did a good job of picking the divas to sing along to- Mariah, Britney, Beyonce, Lady GaGa, and Madonna. We also had some ABBA, Snoop Dogg, *NSYNC, Kanye West, and finished up the night with a rousing rendition of the Spice Girls' "Spice Up Your Life." I was hoarse by the end of the night but had a great time.
Posted by Nicole at 11:26 PM No comments: 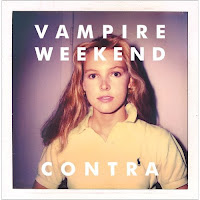 Danny and I headed to Festival Hall tonight to see the second Melbourne show for New York band Vampire Weekend. It was an all ages gig and I was flattered to have been carded at the door (although they may have been doing that to everyone). The opening act was Sydney band Cloud Control, who I have been wanting to see for a while now. Their set was full of lovely harmonies and "Gold Canary" and "Buffalo Country" were highlights of the evening.

Vampire Weekend came out to huge cheers from the crowd. I am not as familiar with their music as Danny is, but they put on a solid set playing the majority of the songs from their two albums. Their indie rock sound is infused with Calypso rhythms, and while interesting, some of songs started to sound a bit the same after a while. My favorites of the evening were "Oxford Coma," "Cousins," "A-Punk," and the current single "Giving Up The Gun." They closed out the night with "Cape Cod Kwassa Kwassa," which I found amusing since kids from Melbourne were singing along to a song about Cape Cod. All in all it was a good night of music, and my first time in the box that is Festival Hall.
Posted by Nicole at 11:50 PM No comments: