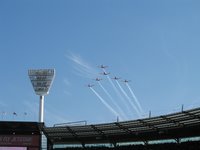 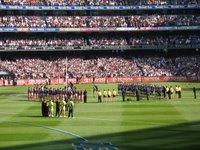 Today was ANZAC Day, which honors the Australian and New Zealand Army Corps who landed and fought at Gallipoli in Turkey during World War I. There was the dawn service at the Shrine of Remembrance, and then a parade for all past members of the armed services on Swanston Street. I spent my ANZAC Day with Michelle at the MCG for the annual clash between Essendon and Collingwood. Before the game started they had planes fly over the stadium as well as a ceremony to honor those who have died in war.

Over 91,000 people turned out for the game, which was the first footy match of the season at the MCG since it was used for the Commonwealth Games. The match itself was close and somewhat frustrating to watch with all the mistakes on both sides. It was good to see James Hird play again in person, although even he missed a kick for goal. Essendon was in the lead at half time, but Collingwood came back in the third quarter and took the lead, keeping ahead until the end of the match. We left as soon as we heard the strains of the Collingwood club song starting to play over the speakers. 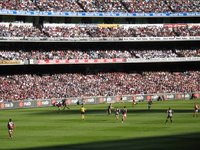 Today is the 100th anniversary of the 1906 earthquake and fire in the San Francisco Bay Area. The 7.8 - 7.9 quake shook the Bay Area for 40 seconds, but it was the fire that raged for three days that did the most damage to San Francisco. This website on The Great Quake has tons of fantastic information, photos, and multimedia about the quake and rebuilding.
Posted by Nicole at 10:06 PM No comments: 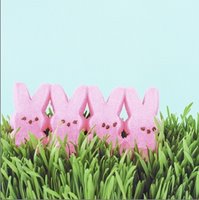 I hope you had a very happy Easter/Passover weekend. Here in Australia, Easter Sunday just isn't enough, so both Good Friday and Monday are public holidays. They would never get away with that in the States. I think Good Friday was considered more "holy" than Easter in some eyes just based on the open hours at my gym. In Victoria they have the Good Friday Appeal for the Royal Children's Hospital- sort of like the Jerry Lewis MDA Telethon. They raised over $10 million this year. Chocolate is big here, but hot cross buns seem to be the food of choice. I didn't see any Peeps in the stores- they may just be an American phenomenon.

As for my weekend, it was pretty relaxed. I went to mass at St. Ambrose's Church on Easter Sunday, and have been enjoying marathons on tv for Australia's Next Top Model (first season) and The O.C. (first and second seasons). There's not much else to do when most things are closed. Thank goodness I have Foxtel digital cable. Hopefully my Easter package from the family will arrive this week- a casualty of the four day weekend.

Thanks for my See's Candies Mom!
Posted by Nicole at 9:47 PM 2 comments:

Tonight was the first night of the Melbourne International Comedy Festival. Michelle and I headed to the Melbourne Town Hall to catch some of the local talent this evening. The first comic was Tom Gleeson in his stand-up show "Non Stop Tom." He did bits about different things in his life, and used some of the audience members to help with the transitions between stories. My favorite part was at the end when he played the James Blunt song "You're Beautiful" but was pretending he and his girlfriend were on the train looking and commenting back to James after he sang each line. It was very funny as Tom got more pissed off at James for staring at his girlfriend and being a perv. I'll never listen to that song in the same way again. 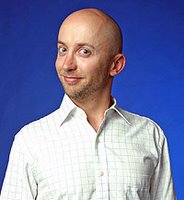 The other comedian we saw was Justin Kennedy in his one-man show "Beelzebuzz." In the show Justin plays multiple characters who are stuck on a party boat that descends into chaos. The show was inspired by "Lord of the Flies" (yes, there was a character named Piggy who ends up dying) and contained flashback scenes for each character like those done on the tv show "Lost." Justin is very talented and each character had their own voice, mannerisms, and personality. It was amazing to watch Justin transition from one character to the next. There were a few technical glitches with music cues (it was the first night), but the show really hit its stride towards the end. It's probably one of the most unique shows in the whole festival. I really enjoyed it.
Posted by Nicole at 11:58 PM No comments:

Tonight Helen helped to orchestrate a surprise 30th birthday party for Will at The Butterfly Club in South Melbourne. Will was completely shocked and had no idea what was going on as he walked upstairs and saw everyone. Helen had brought together family and friends from throughout Will's life. James gave a speech on the early Melbourne Grammar years, and Cameron covered Uni and beyond. We had free drinks, food (from both the venue and Will's mom, Beth), and good conversation. Welcome to your 30's Will- it's not as bad as some people make it out to be.
Posted by Nicole at 11:41 PM No comments:

Last night Michelle and I headed to the Telstra Dome for the opening round of the Australian Rules Football season. Even though we had seats up in the third level, it was still a good view of the field. There was a good turnout of over 45,000 people for the game. Unfortunately, James Hird hurt his calf during the week, so he did not play for the Essendon side. I'm convinced I am some sort of curse on Hird because he's always injured when I go to a match. 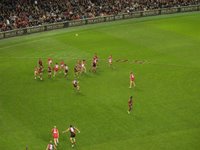 Since the Australian Formula 1 Grand Prix is this weekend, they had Toyota driver Ralf Schumacher there to do the coin toss. Essendon won and started off with a very strong first quarter. Matthew Lloyd kicked 6 goals and put the Bombers well ahead of the Swans. Sydney played better the rest of the match, but never came closer than within 3 goals. Thankfully Essendon triumphed with a 27-point victory. Final score:
Essendon- 17.6 (108)
Sydney- 12.9 (81)
Posted by Nicole at 5:12 PM No comments: 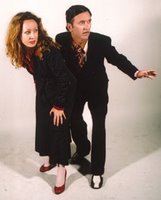 The Brunswick Music Festival is currently happening around town, so Ruth and I headed out to Don't Tell Tom on Sydney Road last night to catch a show by Dave Graney. I first discovered Dave ten years ago when I was living in Melbourne, and have been a fan ever since. He is a very interesting and entertaining fellow with a soothing voice and many stories to tell. His current band, which includes his wife Clare Moore, is The Lurid Yellow Mist. The band played selections from throughout Dave's career, so it was great to hear some of my old favorites reworked live. Dave is such a unique musician, and I was glad to finally get to see him perform in person. You can check out one of Dave's newest songs here: "My Schtick Weighs A Ton"

The opening band was Sand Pebbles. They sounded okay, but the most interesting part of their set occurred towards the end. During an extended distorted guitar feedback section of a song, Ruth and I noticed that the drummer was taking his cymbals off the drum kit. Then Clare Moore appeared and took over drumming duties as we watched the drummer walk out the front door with his equipment! It was hilarious and shocking at the same time- I guess he had to be somewhere. I've never seen anything like that happen before at a live show.
Posted by Nicole at 12:03 PM No comments: