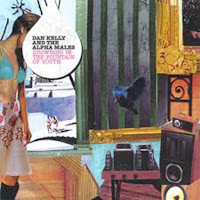 This year is the 10th anniversary of the Dan Kelly and the Alpha Males' album Drowning In The Fountain Of Youth. To celebrate Dan got the old band back together for a special sold out show at Howler last night.

Opening the evening was Jade Imagine (aka Jade McInally) who played a good set with her band. Her songs had a bit of an old school indie sound and they did a cover of The Church's "Columbus." Next up was Melbourne three piece band Loose Tooth who I really enjoyed. All three members took turns on lead vocals, with their sound ranging from garage rock to shoegaze at points when the female guitarist and drummer were harmonizing together.

It was a packed house when Dan Kelly and the Alpha Males took to the stage. They played all 12 tracks from Drowning In The Fountain Of Youth from start to finish. Highlights for me were "Safeway Holiday (Get Wise)," "Drowning In The Fountain Of Youth," "My Brains Are On Fire!" and "Drunk On Election Night," which featured Dan Kelly on guitar and Dan Luscombe on keys as the audience sang along to the chorus. There was amusing banter about the origins of the songs throughout the night, and Dan and Dan complained that they get mistaken for each other in public all the time. The only song that didn't go to plan was "Vice City Rolling," which had a few stops and starts throughout the song but they finally got there in the end. The encore (although they didn't leave the stage) featured songs from their first album The Tabloid Blues with "Checkout Cutie," "Bunk Lovin' Man" and "Summer Wino," which finished off the night. It was quite an entertaining evening and always special when you get to hear an album played live from beginning to end.

Posted by Nicole at 5:27 PM No comments:

I started today's MIFF sessions at the Forum Theatre with two films about refugees sponsored by Oxfam Australia. The first was the short film 1001 Nights In Fairfield by Zanny Begg, which told different stories of survival by members of Sydney's Iraqi community interspersed with dance and song. The main feature was Rokhsareh Ghaemmaghami's documentary Sonita about a 14-year-old undocumented Afghan refugee living in Iran who aspires to be a famous rapper. Sonita raps about misogyny, oppression and forced marriage and nearly becomes a victim of the latter when her mother appears wanting to bring her back to Afghanistan to marry her off in order to pay for her brother's marriage. It is at this point that Ghaemmaghami breaks the rules of being a documentarian and gets involved by paying off Sonita's mother to buy her a bit more time. As a video of one of Sonita's songs "Brides For Sale" gets some notice her fortunes begin to change in unexpected ways.

Continuing the theme of female musicians my next film was a documentary on Janis Joplin by Amy Berg called Janis: Little Girl Blue at Hoyts Melbourne Central. With extensive access to Janis' family, friends and musical collaborators, Berg utilises these first person accounts along with Janis' letters home to her parents to tell the story of her life and rise to fame. I hadn't realised how much Janis struggled with being bullied growing up and trying to gain acceptance from her peers as she started out as a blues and folk singer in Texas. Archival footage of her interviews and performances show her immense talents as a singer and why she was such a powerhouse on stage. The film provides a great overview of the 1960s counterculture movement that started in San Francisco Bay Area and spread across the country, including a lot of drug use that ultimately led to Janis' demise from a heroin overdose in 1970 at the age of 27.
Posted by Nicole at 9:02 PM No comments:

MIFF- Paths Of The Soul and The Eagle Huntress

The Melbourne International Film Festival kicked off this week and will run over the next few weeks in venues across the CBD. My first MIFF film yesterday afternoon was Paths Of The Soul at the Kino Cinemas. This film by Zhang Yang follows a group of Tibetans villagers on a pilgrimage to the city of Lhasa and the Jokhang Temple. This months long, 1,200 km plus journey is done by kowtowing, where the villagers clap wooden planks strapped to their hands three times and then dive out onto the road, touch their forehead to the ground and then get up to repeat the process. The group encounter all sorts of weather and terrain, often having to be careful of the trucks driving along beside them on the road. After setting up camp each night they pray and also discuss the reasons for taking this pilgrimage. The film is a beautiful display of devotion and shows the range of human experiences from birth to death that occur throughout the journey.

This evening I watched The Eagle Huntress at ACMI, a documentary film by Otto Bell about a 13-year-old Mongolian girl, Aisholpan, who aspires to become an eagle hunter just like previous generations of Kazakh men in her family. While she has the support of her father and grandfather, many other elder eagle hunters do not agree with this break in tradition. After Aisholpan captures and trains her eagle, she participates in the regional Golden Eagle Festival competition against 70 other hunters. This movie is quite uplifting and a great coming of age story about female empowerment and the breaking down of gender boundaries.
Posted by Nicole at 8:38 PM No comments:

This is the final weekend for the 200 Years of Australian Fashion exhibition at NGV Australia. It contains over 120 pieces from more than 90 designers that span two centuries of fashion in Australia. The exhibition was staged across four large rooms, with each one themed around a different era.

The late 1800s to early 1900s dresses were classic Victorian era designs with cinched in waists and large bustles and trains. 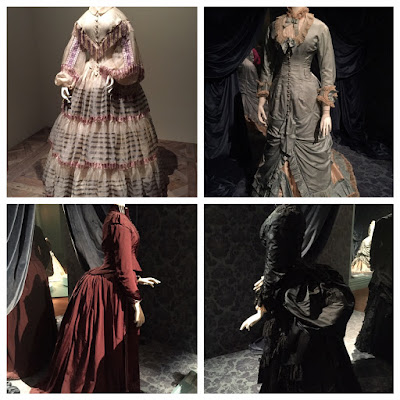 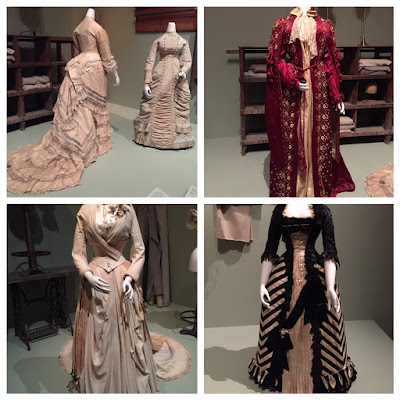 The 1950s salon was filled with some really beautiful dresses, and included a revolving platform in the middle surrounded by hanging mirrors. 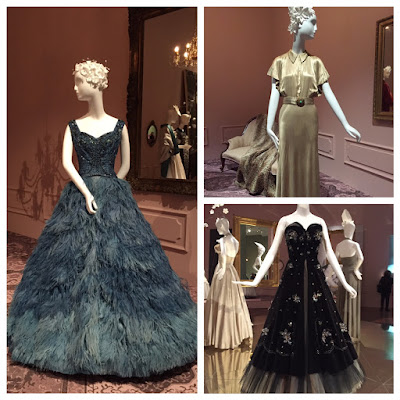 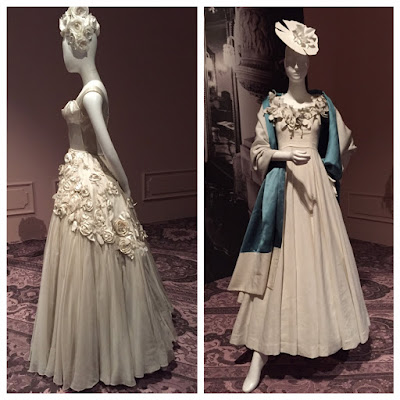 The 1960s and 1970s styles on display ranged from mod A-line dresses to flowers and kaftans, with the emergence of Australiana elements in designs by Jenny Kee and Linda Jackson in the late 1970s and early 1980s. There was one room set up like a large 1980s fashion runway, with videos of different fashion shows from that era playing on the walls. 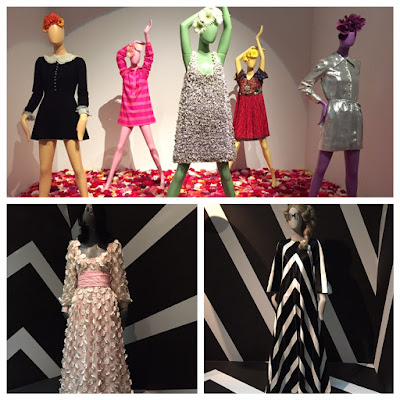 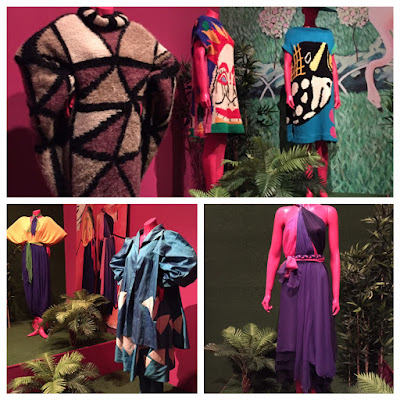 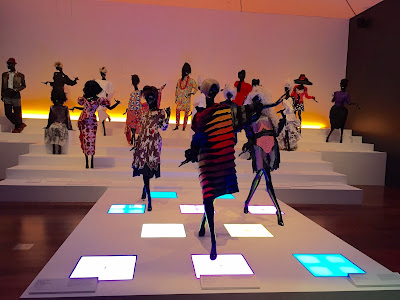 The last part of the exhibition featured works from contemporary Australian designers and demonstrated more of a minimalist design aesthetic. The final piece on display was a four meter tall dress by Dion Lee specifically commissioned for the exhibition, which was quite impressive to see in person. 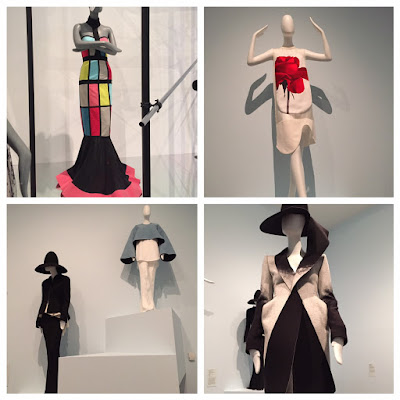 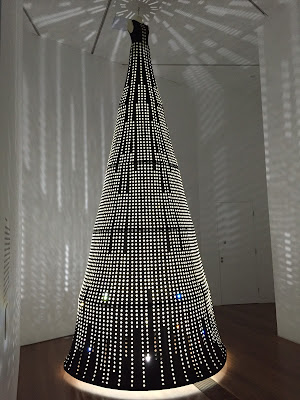 Tonight was the opening of the Gertrude Street Projection Festival for 2016. Once again there were many interesting pieces created for this year's festival, and the addition of the Atherton Gardens as its very own precinct.

The large building projections are always very popular attractions. Ian De Gruchy's Digital Op Pop was a kaleidoscope of color and design. The Atherton Towers were lit up by Jacob Tolo and Susan Maco Forrester's Fractures, which explored identity and whiteness. The Builders Arms Hotel was utilised by Kate Geck for her work Apeiron on the effects of technology on people's attention spans.


Geometric shapes were evident in a few pieces. Kit Webster's Morphic Prism is a pyramidal video installation of a recursive reflection tunnel. Lauren Simmonds utilised sculpture and projections in her piece The State of Becoming. Skunk Control were back again this year with Systematic Sanctions, which contained a little urban landscape on a hill that had lights going on and off in the houses.


One of the more political pieces was Alfeo Sanches Pereira and Eneti Waretini's A Natural Resource Curse, an animation about the maritime boundary dispute between Australia and Timor-Leste.


Finally, some of my favorites were filmed pieces featuring women. Youjia Lu's Chora showed the artist as a bath gradually filled with water. Petrina Hicks' Gloss featured a butterfly flapping its wings in slow motion while perched on a woman's mouth. The highlight of the festival for me though was Luzena Adams' piece Reverie with its graceful redhead swimming underwater and dipping in and out of the top and bottom of the frame.