Stories Of Australian Music: Can I Have Your Autograph? 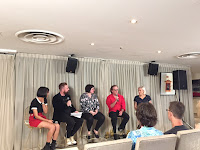 The Australian Music Vault at the Arts Centre Melbourne is hosting a series of public talks, and tonight I went along to the second one titled Can I Have Your Autograph? which discussed the role of fans and fan communities. Facilitated by writer and journalist Jenny Valentish, the panel consisted of my friend Peter Green (PR and fan club for Crowded House, Split Enz and Skyhooks), Lynne Trute (Nick Cave collector and fan), Owen Lambourn (co-founder of the Kylie Krew fan community for Kylie Minogue) and Holly Pereira (writer and assistant booker at Howler).

The panel discussion was quite interesting and covered a variety of topics. They started with discussing their earliest fan memories and then how they became involved with the artists they work for or support. There were interesting stories of encounters with fans (and how to spot the scary ones), as well as the importance of the fan community and the role it plays in their own lives as they've developed personal friendships. I know for me that my own fandom of Crowded House and the Finns has allowed me to travel around the world and meet people I wouldn't have otherwise become friends with. Peter Green and Lynne Trute also talked about their extensive curator and archival roles for artists to document their musical histories. I liked how Peter noted that each band usually has one member who acts as the historian for the band. Overall it was a really interesting hour long discussion and just confirmed that fan communities are pretty similar across the board.
Posted by Nicole at 10:14 PM No comments:

Email ThisBlogThis!Share to TwitterShare to FacebookShare to Pinterest
Labels: music 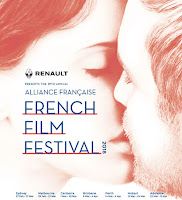 It's once again time for the Alliance Francaise French Film Festival in Melbourne, which is running from 28 February - 27 March 2018. Over the past couple of weeks I've been attending a number of films both solo and with friends. Here is what I ended up seeing this year:

Rock'N Roll is an exaggerated satire based on elements of the real lives of its stars director and actor Guillaume Canet and his partner actress Marion Cotillard. Canet is shooting a movie when he realises his younger co-stars don't consider him as young and hip as he used to be. This sets him off on a midlife crisis and downward spiral of partying and and trying to make himself look younger (which is taken to an absolute and comedic extreme). The film features a who's who of French cinema all making cameos as themselves and has some laugh out loud moments throughout.

Number 1 is a drama that explores the status and influence of women in the corporate world in France. Emmanuelle (Emmanuelle Devos), a member of the board of directors of an energy firm, gets approached by an influential network of women who want to put her forward to be head of France's largest water company. The film looks at the white male power structures and the glass ceilings women face when trying to advance their careers to top leadership positions.

Problemos is a hilarious post-apocalyptic comedy about a couple that goes to visit the wife's friend on a commune for the weekend, but never gets to leave because of a global pandemic that is wiping out the human race. Somehow all of these different personalities have to try and work together to create the utopian society they've been dreaming of, but of course things don't quite work out as they would have hoped.

120 BPM (Beats Per Minute) is a film set in Paris in the early-1990s documenting how ACT UP Paris fought against the government and pharmaceutical companies for the rights of people living with HIV/AIDS. It shows the lives of various members of the collective, in particular the relationship between Nathan (Arnaud Valois) and Sean (Nahuel Perez Biscayart), who is living with HIV.

The Return Of The Hero is a funny comedy starring Jean Dujardin as Captain Neuville, a member of Napoleon's army and casanova who gets engaged to Pauline, the younger sister of Elizabeth (Melanie Laurent) from an aristocratic family. Elizabeth can see through Captain Neuville, and when he gets immediately called off to war but never writes Pauline as promised, Elizabeth steps in to lift her sister's spirits with heroic tales from the battlefield. When Captain Neuville shows up in town a few years later, all sorts of hijinks ensue.

Gauguin is a period biopic that focuses on post-Impressionist painter Paul Gauguin's (Vincent Cassel) years living in Tahiti in the late 1800s. He left behind his Danish wife and five children to travel half way around the world and be inspired by a new environment. Poor and sick he befriends a local French doctor who tries to look after him, and also starts a relationship with a young Polynesian girl Tehura (Tuhei Adams), who becomes a bit of a muse for his works. The film is told from Gauguin's colonialist viewpoint, which makes it hard to have much sympathy for him, especially the way he treats Tehura towards the end of the film.
Posted by Nicole at 7:32 PM No comments: 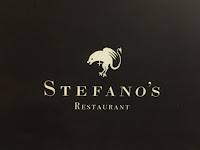 This afternoon a group of us flew up to Mildura, located in the north western part of Victoria along the border with New South Wales, for a work meeting we are having tomorrow. Since today is my director Sean's birthday we decided to celebrate by having dinner at Stefano's Restaurant in the cellar of the Mildura Grand Hotel. Owned and run by chef Stefano de Pieri, he cooks Italian food using seasonal and fresh produce.

We had the five course Italian style set menu for $99 per person. This degustation started with fried calamari with a light rocket salad. Next we had a beautiful spinach souffle with pesto and truffle oil. It was full of flavor and my favorite dish of the night. The third course was a simple pork ravioli with a cream sauce. 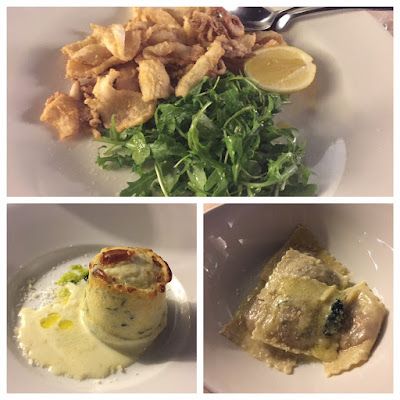 Our fourth and main dish was a perfectly cooked rump steak with green beans, very flavorful roasted potatoes and an almond puree. Even after these four courses I didn't feel too full as the serving sizes were just right and they spaced out each dish so you could enjoy it. For dessert we had a really lovely vanilla custard in a cinnamon flavored small filo pastry bowl with a fresh piece of mango on top. As a bonus they brought us out some handmade chocolates to finish off the night. 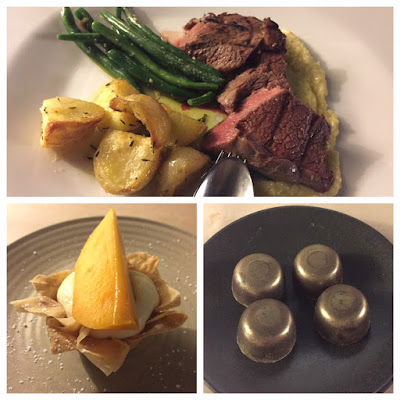 Overall it was a really tasty meal with excellent service in the unique surrounds of the historic cellar restaurant. If you are ever in Mildura I would recommend eating there or at any of the other venues Stefano runs in town.
Posted by Nicole at 11:48 PM No comments: 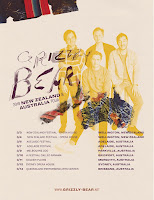 As part of their Australian tour in support of Painted Ruins Grizzly Bear made a stop in Melbourne tonight to play Zoo Twilights at the Melbourne Zoo. This was my second time seeing the band in the last few months as I was fortunate enough to catch them in San Francisco in December when I was home.

The opening act was Swedish musician Jens Lekman, who played a really entertaining set of his poppy songs that had everyone bopping along. He told great stories to explain the origins of the songs, including "An Argument With Myself" which was written about Melbourne when he used to live here. 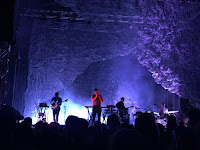 The whole front section of the crowd was standing by the time Grizzly Bear took to the stage. They opened with one of my favorite tracks off of Painted Ruins, "Aquarian." Other highlights from the album included "Cut-Out," "Four Cypresses" and "Mourning Sound." The band sounded great and seemed to be enjoying themselves throughout the evening. Ed commented that this was their biggest crowd yet in Melbourne. I was happy to hear many of my favorite tracks from their back catalogue such as "Yet Again," "Sleeping Ute," "Two Weeks," "On A Neck, On A Spit" and "While We Wait For The Others," which closed out the main set. During the encore Chris Taylor made the funny comment they thought playing at a zoo would be the low point in their career but that the setting was actually was quite nice. To finish the night they played a fantastic version of "Sun In Your Eyes." It was another amazing live show from the band and just so impressive to watch them play and enjoying themselves on stage.

Here's the video for "Neighbors"

Birdz and Omar Musa are on a joint tour around Australia and tonight was their first show together at The Toff In Town. Opening up the evening was singer-songwriter Alice Skye. She and her band played these dreamy yet sad songs, and she joked about the contrast between her and the rest of the bill musically.

Omar Musa and his DJ Sezzo Snot were up next, and his set featured songs from his latest album Since Ali Died, including "Assimilate," "Rose Gold Lover" and the very catchy "Like A Cat Move." Omar is such a brilliant lyricist and someone who continues to tackle the social justice issues of the day in his music and poetry. It was good to hear songs off his previous EP with "Dead Centre," "Freedom" and my favorite "Lak$a," which got the audience moving.  To finish his set he did a spoken word version of his song "UnAustralia." I only wish that he had played for longer as his set went by too quickly.

Birdz hit the stage with a DJ and drummer, which added a lot to his set. He played a lot of songs off his debut album Train Of Thought, including "Crown Thieves," "This Side," "Rise" and "Black Lives Matter." Birdz is another strong rapper on the scene who is addressing serious topics in his songs. He brought Omar Musa up on the stage to perform their new song together "About Me," and finished off the night with the powerful track "Testify." It was great to get the opportunity to see both Omar and Birdz touring together and playing in such an intimate venue.

Here's the new video for their joint single "About Me"

The Harpoons have recently released their latest single "Reassurance" and tonight was its launch at Howler. Lead singer Bec Rigby did a Welcome to Country and was wearing her overalls with "Always was, always will be" painted on them. They opened with "Pressure" and played a few other songs such as "Reassurance" and "Do You Want My Love" off their upcoming album, which is finally coming out in April 2018 (the band thanked everyone for their patience).

There was lots of dancing and singing in the crowd throughout their hour long set. They also played some older tracks including "Can We Work This Out" and "Unforgettable," and finished the evening with "Faith." Despite some technical glitches they persevered and played an entertaining set. I'm looking forward to their new album finally getting released.

Here's the video for "Do You Want My Love"