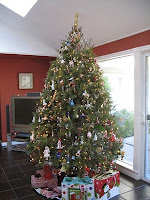 Merry Christmas! It has been a long but fun day. We started the morning with 10:30 am mass at St. Raphael's Church where I saw Lynne, Jeremy and her family as well as my great-aunt Lorraine. Once we got home it was time to finish cleaning and get started on cooking dinner. As has become an annual tradition, my Aunt Chris and cousins Leilani and Meinani came over for Christmas dinner. Unfortunately James was working, plus with the new baby he and Simi weren't going to be able to come down this year. 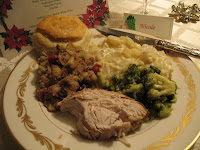 We started with cheese and crackers and some mulled cider before moving into the dining room for our big meal. My mom made Jello salad with cranberries, and then it was time for the main meal of scalloped potatoes, turkey, stuffing, and broccoli. All of it was delicious, and Lei also brought a couple different bottles of white wine to have with dinner. 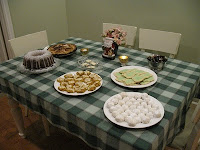 After finishing eating we went back out into the living room to digest food and exchange presents. Lei was furiously knitting to finish up one of my gifts- a scarf. When we had a bit of room in our stomachs it was time to hit the dessert table. All of that baking from yesterday was now available to eat. I had a little sample of everything, and the apple pie came out well. It was another successful Christmas dinner, and as always nice to spend time with family over the holidays.
Posted by Nicole at 11:07 PM No comments:

Baking up a Storm

I have spent the majority of today baking assorted treats with my mom for our Christmas dinner tomorrow. I think we may have too much dessert. 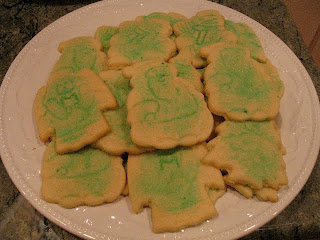 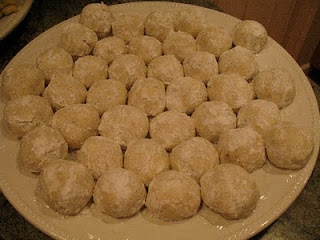 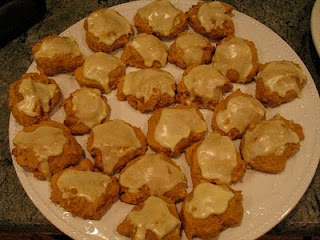 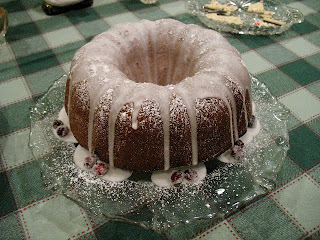 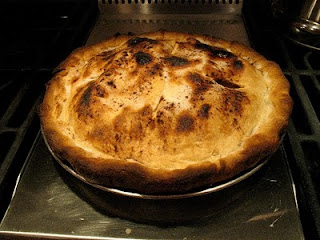 I have spent the last two days helping the US economy by shopping up a storm. On Sunday my mom and I went to Vintage Oaks in Novato and hit Target, Old Navy, Bath and Body Works, Ann Taylor Loft, and Costco. My biggest bargain of the day was a zip hooded fleece sweatshirt on sale for $5 at Old Navy (in fact, I got a lot of clothes on sale there and only paid about $100 total).

Today we went to The Village and Town Center in Corte Madera. I managed to finish up my Christmas shopping at Williams-Sonoma (along with getting some peppermint bark and hot chocolate), got a nice pair of trousers on sale for $16 at the Gap, a laptop battery at the Apple store (very much not on sale), and also checked out J.Crew, Anthropologie, and Crate and Barrel. In the midst of all this we also stopped for lunch at Boudin, where I continued to indulge my love of sourdough by having clam chowder in a bread bowl.
Posted by Nicole at 6:22 PM No comments: 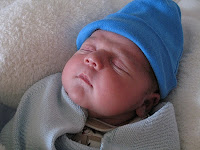 Today my parents and I headed up to my brother's place to have lunch and see my nephew Logan, who is now two-weeks old. Dad made his very yummy clam chowder and we also binged on my favorite sourdough bread from Bordanave's. It was great to meet Logan, who is a cute and fairly mellow baby. I got to hold and feed him briefly while he was awake. It was also nice to catch up with James and Simi and Simi's parents, who are staying with them until the new year. Everyone seems to be doing pretty well considering the huge life changing event. We will be back up to visit them after Christmas to exchange presents and spend more time together.
Posted by Nicole at 7:41 PM No comments:

Flying Across the Pacific

Today was my flying day on Air New Zealand: Melbourne to Auckland and then Auckland to San Francisco. I managed to occupy my time by reading, listening to music, and watching the films Julie & Julia, It Might Get Loud, and Funny People. Due to a strong tail wind we actually arrived in San Francisco an hour early! It was a clear and crisp day as we drove across the Golden Gate Bridge into Marin County. I am happy to be home for the holidays and hopefully the jet lag won't be too bad.
Posted by Nicole at 5:22 PM No comments:

Yesterday Tash and I attended The Boroughs, which organisers said would be "a celebration of the culture, street art and music of New York." Originally scheduled to be at a warehouse on La Trobe Street, the venue was changed to Shed 4 in Docklands. Wilfred Jackal was finishing up their set when we arrived. Both Tash and I were a bit confused as we walked in. First problem was that they were only using part of the Shed, which didn't really make much sense. Their attempt at making it "New York" was to have some opened shipping containers around the floor, graffiti artists painting a wall (they were amateurs compared to a lot of the graffiti you see around Melbourne), some really bad attempts at performance art, and a small skate ramp for the skaters. It was a total fail.

Music-wise the bands really had nothing to do with New York either, but there was a good mix of different styles. The sound in the Shed was horrendous though, which was really apparent for the bands we have seen live before. I wouldn't mind hearing The Hello Morning in an intimate venue as their alt-country sound was so muddy in the venue. The Frowning Clouds played with a lot of energy and had a group of people dancing at the front of the stage. Bachelor of Arts was probably the closest to a New York sounding band, and Hot Little Hands played a good set of indie rock.

Miami Horror had everyone dancing and their single "Sometimes" got a big reaction from the crowd. Up next was Yves Klein Blue, who were fantastic as always. It was great to hear "Getting Wise," "Polka," and "Digital Love." The final act of the evening was Bertie Blackman, who was dressed in a monk's robe for most of the night. In her hour-long set she played the one song I know of hers, "Byrds of Prey," as well as covers of Phil Collins' "In The Air Tonight" and a Fleetwood Mac song. The funniest part of her set though was watching the Frowning Clouds boys with supersoakers running around side of stage and spraying the audience.
Posted by Nicole at 9:51 PM No comments: 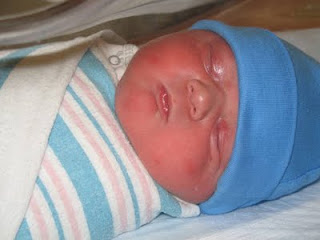 Welcome to the world my nephew Logan James. He is a big boy at 9 lbs 13 oz, and is 20 inches long. To think he was two weeks early! I can't wait to meet and hold him in person in a couple weeks when I am home for the holidays.
Posted by Nicole at 1:10 PM No comments: