My final show for the 2018 Melbourne International Comedy Festival was Helen Bidou (aka Anne Edmonds) in Enter the Spinnaker Lounge. Helen Bidou originally appeared as the fashion expert on the spoof morning tv show Get Krack!n. In this show she attempts her own variety hour by interacting with the audience, chatting with guests and singing songs, all while accompanied by her awkward son and wannabe DJ Connor (Sam Campbell).

Helen wore her trademark sarong and was sipping cocktails throughout the show. She tried to keep it together while she occasionally railed against those in her life who had wronged her, including her on again/off again beau Simon. It was a show that kept you laughing but tense as you didn't know what Helen would do next. It wasn't nearly as shocking as I was expecting, although the final number is pretty revealing (and why the show has an 18+ rating).
Posted by Nicole at 11:36 PM No comments:

Oh Mercy has just put out their fifth album Cafe Oblivion, and tonight was the final show of their Australian tour at Howler to celebrate its release. I arrived for the second support act Jae Laffer, who played a mix of songs from his band The Panics and solo material. Playing acoustic guitar and accompanied by an electric guitarist and the occasional pedal steel guitar, his set included The Panics singles "Don't Fight It" and "Weatherman."

In a throw back to Oh Mercy shows of old the band came onstage to the sound of birds. They surprisingly started the set with a cover of Burt Bacarach's "This Guy's In Love With You." The songs from Cafe Oblivion featured prominently throughout the night, including the singles "Keep A Light On" and "National Park" as well as "Lee & Nancy," "Hot Topic" and "Auto Bellissimo" (unfortunately my favorite track "Ring & The Jewel" didn't get played). Alex Gow sounded fantastic vocally and did a mini solo set in the middle with "Lady Eucalyptus," "My Man" and a new song which I think is titled "Time And Date In New York."

I was impressed by the new arrangements for most of the songs, and this latest incarnation of the Oh Mercy live band is a bit of a powerhouse. Older tracks such as "Deep Heat," "Can't You Hear My Body (Calling Out To You)" and "Sandy" had a bit of new life to them. To finish out the main set they played "Restless Woman" and then Alex did an impromptu encore with a cover of Ed Kuepper's "This Hideous Place" that had the room silent. Overall this was one of the stronger Oh Mercy live performances I've seen in a while and I'm hoping we'll get more live shows sooner rather than later.

Here's the Aussie musician filled video for "Keep A Light On" where Alex wears a blazer he describes as a Split Enz b-side (he also wore it tonight): 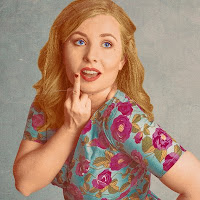 Tonight was a big night of comedy shows for me at the Melbourne International Comedy Festival as I went to three different performances. I began the evening with New Zealand comedian Louise Beuvink's show Ladylike: A Modern Guide to Etiquette at the Butterfly Club. Dressed like a 1950s housewife, Louise took the mainly female audience through her modern takes on being a lady, including lessons on how to dress and put on makeup, cheap ways to entertain through homemade food and drinks, and a quick lesson on cricket to be able to talk to guys. Her funniest bit was a twist on women acting like some men do when being turned down by the opposite sex. The show was a blend of stand-up and cabaret (Louise has a really great singing voice). 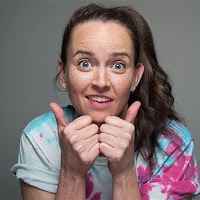 Next I headed to the Melbourne Town Hall for Australian comedian Zoe Coombs Marr and her show Bossy Bottom. In this show Zoe sheds her male alter ego of the past six years Dave and performed stand-up as herself. She promised that this show would be just jokes, jokes, jokes, but of course that was never going to be the case. Zoe was full of energy and commanded the stage throughout her set as she broke down the traditional tropes of stand-up comedy (particularly that of white hetero males) and did call backs to different bits throughout the night. Her use of props was hilarious, and she had the audience on its toes as you just didn't know where she would go next. This was my favorite show at MICF so far and I highly recommend checking Zoe out if you can.

My final show for the evening was Australian comedian Danielle Walker's Bush Rat at the Victoria Hotel. The title comes from the nickname that Danielle's grandfather gave her, and the show focused on funny stories about her family who live up in Townsville in northeastern Queensland. Danielle also does drawings, which she used to illustrate some of her stories, including a pig with wheels for legs that was a running gag throughout the show. You can see why Danielle has been nominated for Best Newcomer at MICF this year.
Posted by Nicole at 11:38 PM No comments:

It was Tightarse Tuesday again at the Melbourne International Comedy Festival and I booked in to see another two shows tonight featuring comics from overseas. First I made my way down to ACMI for Scottish comedian Fern Brady's show Suffer, Fools! Fern did a set of stand-up and told stories about her life, including her relationships, time at university (including paying for her degree by being a stripper), and jobs as a cook at a halfway house and journalist. It was an honest hour long show with a funny ending.

Next I headed up to the Greek Centre for American comic Alex Edelman's Barry nominated show Just For Us. This is the second time I've seen Alex perform and the main thread of this show is the rise of antisemitism in Trump's America and Alex's decision to attend a white supremacist meeting in an apartment in New York. Alex expertly tells the details of that meeting interwoven with other stories such as working with Stephen Fry, encountering Prince William at the BAFTAs, and his brother competing for Israel in skeleton at the recent Winter Olympics in South Korea. The show is very well written and provides some interesting insights on the rise of intolerance and hatred in today's society.
Posted by Nicole at 11:58 PM No comments:

For tonight's MICF shows first I headed down to the Melbourne Town Hall to see Australian comedian Josh Glanc's show Karma Karma Karma Karma Karma Chamedian. Josh's show was a series of different sketches complete with costume changes (some of them quite revealing). The funniest bits were his Behind The Music take on the rise of the Danish Eurodance band Aqua of "Barbie Girl" fame, and a French mime having a crisis of artistry. There was a lot of audience participation in the show, and a recurring commercial skit with an American footballer was more distracting to me due to him naming the team the Cincinnati Falcons than using a raw fish.

Next I ventured down to the Malthouse Theatre to see Australian comedian Andrew McClelland's latest festival show A Seated Walking Tour of Western Europe. In typical Andrew style he opened with a little musical number. It was a fun show as he used Google Street View to take us on a low budget tour through Europe. Parts of the audience were assigned different travel groups, which were referenced throughout the show as we did certain tourist activities. The tour itself led to some unexpected adventures and side trips along the journey, but we covered quite a lot of ground in an hour.
Posted by Nicole at 11:44 PM No comments:

For tonight's Tightarse Tuesday I booked into two Melbourne International Comedy Festival shows. First up was Canadian comedian Deanne Smith's show Worth It at the Greek Centre. Before the show officially started she came out to admit that the show would not be about money as described in the flyer. Instead it focused on her observations on life, women's equality and tackling her fears as woven through a story about pit bulls. She engaged with the audience and gave a loose and funny set, although I think her show last year was tighter. 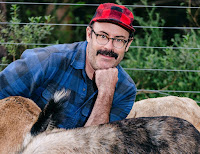 Next I headed down to the Arts Centre for Australian comedian Sam Simmons' brilliantly titled show Radical Women of Latin American Art, 1960 - 1985. While the show isn't really about what's in the title, the start and ending are inspired about an incident he observed outside the museum in LA after seeing that exhibition. The show itself is cleverly paced and organised around a series of impressions which are proceeded by a voice over of someone saying "This is an impression of a man...." There was a lot of audience participation, some singing and dancing, and a string of absurd observational jokes which made for a tense yet entertaining hour.
Posted by Nicole at 11:53 PM No comments: 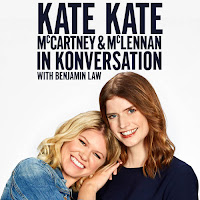 The Melbourne International Comedy Festival is currently in full swing and this afternoon at the Comedy Theatre I attended the Q&A Kate McCartney & Kate McLennan In Konversation, which was facilitated by Benjamin Law. The Kates have worked in comedy for years and are best known for their mock cooking series The Katering Show and Get Krack!n, their satire of morning talk shows.

During this hour long discussion we got a peak behind the scenes as they discussed their creative process for writing their shows. After having seen one of their Get Krack!n characters, Helen Bidou (Anne Edmonds) live last night in her own comedy festival show, they joked how depressing it was to see something you've be created be taken further and funnier than you ever imagined. In the era of #MeToo they emphasised the importance of having a diverse writing room so that one person is not having to represent their entire gender/race, and ensuring that things were safe and fun on set for cast and crew. From a casting perspective they said they are committed to diversity and actively try not to cast white people unless it's needed for the punchline of the joke to work.

They showed a clip of once of the most daring bits from this past season of Get Krack!n, which was an Aboriginal man getting the Kates to "eat my black shit for reconciliation." They also discussed the filming of the infamous Katering Show episode that featured Kate McLennan's actual placenta (but thankfully they did not cook it or eat it). It was an insightful hour listening to two of Australia's great comedic voices, and will be interesting to see what they create next.
Posted by Nicole at 6:32 PM No comments: