It's nearly the end of 2016, so here's my annual compilation of some of my favorite Australian songs released this year. It's another eclectic mix of music styles, with some great Aussie hip-hop really coming to the fore in 2016.

1. The Stiffys - "Celebrate Every Night" 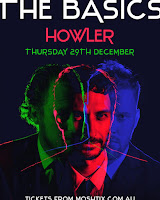 Wally's home for the holidays so that means we were treated to The Basics playing their first proper show together in over a year at Howler. I thought since tonight was sold out we were finally going to get a full rock stage show, but as I walked in and saw the instruments set up in the middle of the floor I knew it was going to be another in-the-round gig.

Opening tonight was Monty Cotton, who appeared last night at The Songroom with the boys. He played a solo set on acoustic guitar (using some looping pedals) and did a great job of engaging with the crowd. He sang a few of his own songs from last night with "Walkabout," "No Reason To Explain" and "Stay With Me Tonight." It was his covers though that really got the crowd's attention as he did a hillbilly reel (which started with "Duelling Banjos" from Deliverance), Johnny Cash's "Ghost Riders In The Sky," and off an audience request for Beyoncé sang "Single Ladies (Put A Ring On It)" but in the voice of Johnny Cash. It was quite funny and topped his trick of doing a guitar solo behind his head. 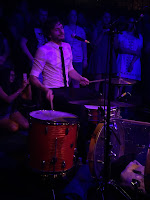 The Basics emerged onto the floor in their matching suits, which was a bit of an indicator of the type of set list they were planning to play this evening. It was great to watch Wally back on the drums as they began the set with "So Hard For You." Everyone was gathered in close and encouraged to dance as we were treated to an old school Basics show. They went deep into the back catalogue as they played "What Have You Done?," "I Could Go On," and "Hey C'mon!" off Get Back and the live staples "My Baby" and "Yeah, Yeah" (complete with dance moves from Kris and Tim). There were also a lot of songs off of Stand Out / Fit In with the highlights being "Bitten By The Same Bug," "Memory Lane," and the classic pairing of "Hey There!" and "Just Hold On." 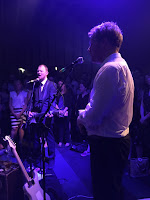 Often at Basics gigs there are running jokes or references throughout the night, and tonight was no exception as "ham" kept getting brought up due to Tim's written reminder to himself on his hand. The other funny moment was when Wally started singing "C is for Cookie" in his Cookie Monster voice. Of the more recent material that was played, "With This Ship" got the biggest reaction from the crowd. I loved hearing "A Coward's Prayer" as it's one of my favorite tracks off The Age Of Entitlement. Kris did a touching version of "To Think Of You," which he dedicated to two friends who had just passed away, and the harmonies on "Hey Rain!" were quite beautiful in the hushed room.

As soon as they finished the main set the call for an encore was loud and continuous from the crowd until they came back out. We got energetic versions of "Roundabout" and 'Time Poor," and considering Wally hadn't been on a drum kit for a year he did quite well to make it through the show. Another oldie that was pulled out of the vaults was "You're Already Gone," and then they played an audience request for "Home Again." The final song of the night was the always fun "Call It Rhythm and Blues," which had everyone dancing, and then the guys took their final bow after playing for nearly two hours. Unfortunately this will be it for a while as Wally heads back to New York to (hopefully) finish his Gotye album, Kris travels to Mongolia to work for an NGO, and Tim takes over ownership of the Theatre Royal in Castlemaine (where they are playing one last 2016 show for New Year's Eve). Mary and I will definitely miss seeing The Basics live, but we know at some point in the future they will reunite and play together again.
Posted by Nicole at 11:41 PM No comments:

The Basics Present The Songroom- Gotye and Monty Cotton

On Wednesdays during November and December The Basics and MC Jess McGuire have been hosting the second season of The Songroom at Northcote Social Club. The Songroom pairs established and up-and-coming Australian acts in an in-the-round session of original songs and covers, with Kris Schroeder and Tim Heath from The Basics acting as the house band.

Mary and I have been a bit delinquent in attending The Songroom this time, but tonight was the last show of 2016 and featured Monty Cotton and the one and only Gotye (aka Wally "Basic" De Backer). As you can imagine, this show sold out soon after Wally was announced as the other special guest.

Wally was introduced first and kicked off the evening with "Coming Back." Tonight was an unique opportunity to get to hear Gotye tracks done in a stripped back, acoustic fashion and the versions of "Bronte" and "Hearts A Mess" (which included Wally playing a little bell) were outstanding. Jess quizzed him on what is happening in New York with the recording of the new Gotye album and Wally said that he's been working with Franc Tetaz on songs. There are also some satellite projects that are a part of the bigger picture, which is what's causing some of the delays. He is hoping to release some songs in 2017. For covers Wally chose to do Simon & Garfunkel's "So Long, Frank Lloyd Wright" (partially due to farewelling his Basics bandmates in a week when he heads back to the US) and Kate Bush's "Army Dreamers." 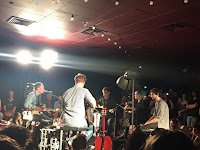 Monty Cotton, a former accountant turned musician, outed himself as a long time fan of The Basics. He is best known for his Johnny Cash tribute show called A Boy Named Cash. For his original tracks he played "Stay With Me Tonight," "No Reason To Explain" and a song he put together of different Irish reels that gradually increased in pace. It was quite funny to watch Wally on percussion keeping up with the fast beat at the end. Monty's cover songs were The Seekers' "I Am Australian" and one of his Dad's songs called "Walkabout." It was at this point that we learned some interesting facts: a) Monty's real name is Alex, and his Dad's name is Monty, and b) he is recording an album of his Dad's songs while also having taken his Dad's name as his stage name.

As the house band for The Songroom, Kris and Tim make a couple "Sultan's Choices" for cover songs each week. Midway through the set they played Stevie Wonder's "They Won't Go When I Go" (a song also covered by George Michael), and at the end they did Robert Palmer's "Addicted To Love" (which inspired a conversation about misheard lyrics). Normally this would have been the close of the evening, but for perhaps the first time ever there was demand for an encore. After people got Tim a beer and Kris a white wine we were treated to two more songs. Tim sang The Basics' "Hey Rain" and they finished the night with Gotye's worldwide smash "Somebody That I Used To Know" (with the women in the audience singing Kimbra's part). It was a great show and hopefully there will be future seasons of The Songroom in 2017.
Posted by Nicole at 11:46 PM No comments: 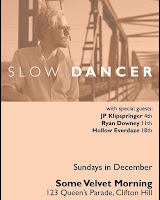 During December Slow Dancer has been doing a Sunday residency at Some Velvet Morning in Clifton Hill. I finally managed to get down there this evening to check out the final show. Opening this week was a three piece version of Hollow Everdaze, who have moved away from a psych-garage sound to a more 1980s inspired indie guitar one. I enjoyed their short set quite a lot and thought they sounded good (much better than when I saw them a couple years ago).

Slow Dancer's set consisted mainly of new songs, with "It Goes On" the highlight of the new material for me. Simon was joined by Nicholas Lam on bass and Myles Wootton on drums for the set, which lasted 40 minutes. Older tracks played were "Took The Floor Out," "Leave It To Me" and "Cornerstone" off his excellent debut album Surrender. The chilled vibes of the set were perfect for an early Sunday evening show, and they finished by playing the latest single "Don't Believe." It's not many artists that have such an instantly recognisable sound as Slow Dancer, and I'm really looking forward to the new album.
Posted by Nicole at 10:28 PM No comments:

Last night was the last date of REMI's tour in support of their excellent new album Divas & Demons at a sold out Howler. The support act for the evening was fellow Melbourne rapper Baro, who had a mainly laid back vibe with soul based samples as well as a few harder tracks. He was joined throughout his set by a few guests on different songs, including rapper Nasty Mars, singer-songwriter Milan on guitar, and even Remi Kolawole for a verse.

In what was a first in all my years of attending gigs in Melbourne, a proper Welcome to Country was done before REMI began their set. Thankfully the majority of the audience were silent and respectful throughout.

From the moment Sensible J and Remi hit the stage the crowd went off (especially when it was announced this show was being recorded for Triple J's Live At The Wireless). They started with "D.A.D" and "Forsaken Man," the first two tracks off Divas & Demons. The new album featured prominently in the set, with highlights being "Uh Uh I'm Gone," "Lose Sleep," "Hate You" (with Baro joining in for his parts) and "For Good." Remi invited Jelena Nikcevic out to do their Triple J Like A Version cover of The Avalanches' "Since I Left You." Tracks off the 2014 Australian Music Prize winning Raw X Infinity were also played, including "XTC Party," "Sangria" and "Tyson." The final song of the night was "Substance Therapy," which closed out a very energetic and engaging show from this Melbourne duo.

Here's the video for "Substance Therapy"

Posted by Nicole at 1:18 PM No comments: