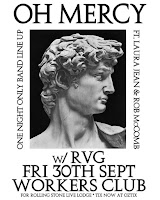 Celebrating Grand Final Eve and Alex Gow's 29th birthday, Oh Mercy and friends played at The Workers Club tonight as part of the Rolling Stone Live Lodge series. The opening act for the evening was Melbourne four piece RVG. Frontwoman Romy Vager was quite a captivating presence, and their sound was reminiscent of early 1980s post-punk. It was a really good and authentic set.

Alex kicked off the evening on keyboard playing "Lady Eucalyptus." The first part of the set featured Alex solo on keyboard and guitar with the occasional friend invited to join him on stage for songs. We got to hear old favorites "Lay Everything On Me" and "Keith St.," and Olympia came out to play on the When We Talk About Love tracks "Let Me Be Him" and "Iron Cross." Alex did a beautiful version of Ed Kuepper's "This Hideous Place" on acoustic guitar. When Jae Laffer of The Panics came out he changed things up by playing Alex a song - The Panics' new single "Weatherman."

Being Alex's birthday he was a bit introspective about life and death, and joked that he felt this gig with his friends was like a funeral scene out of an episode of Touched By An Angel (perhaps the first time that tv show has ever been referenced at a concert). This show provided Alex with the opportunity to debut some of the new songs he's been working on. They covered a range of themes from Japanese saunas to crocodile meat, and the stand out track for me was "Hot Topic" with its steady groove.

The second part of the set featured the one night only Oh Mercy "hot rock band" line up containing Laura Jean on bass, Rob McComb (The Triffids) on guitar, Ceci Dowling on viola, Liam McGorry (Saskwatch) on horns, and Etta Curry (Loose Tooth) on drums. The band sounded fantastic as they played "My Man" (perhaps the best live version of that song I've heard with Liam's flugelhorn), "Without You" and "Deep Heat." The evening concluded with the band and Jae Laffer doing a cover of Bob Dylan's "Highway 61 Revisited." It was an entertaining night with some very talented musicians. Alex says there should be a new Oh Mercy album next year, so that is definitely something to look forward to.
Posted by Nicole at 11:58 PM No comments:

To celebrate the release of their debut EP The Dead End, Brisbane/Sydney band Sans Parents (well half of the band) came down to play their first ever Melbourne show at The Retreat Hotel front bar in Brunswick tonight. Due to me watching the AFL footy finals (Go Doggies!) I only managed to catch the last song of opening act Louis Spoils' set.

Mary and David joined me before Sans Parents began to play. The half of the band that made the trip down were lead vocalists Alex Bennison on electric guitar and Kane Mazlin (ex-Hungry Kids of Hungary) on keyboards. They joked that the other two band members were actually their parents and they had no idea where they were. The guys played songs off their EP as well as a few other tracks. I enjoyed the power pop of "Can't Stop Moving," "Maybe The World's Trying To Tell Me Something.." and "Dead End." In a week where Mary and I have been battling for pre-sale tickets to the upcoming Sydney Opera House encore shows, it was nice to hear a cover of Crowded House's "It's Only Natural." The show was fun and informal, and Alex switched out guitars to play one he just bought for the last song of the night, "Loose People." It was great to get the opportunity to see Sans Parents live for the first time, and I look forward to them coming back with the full band next time.

Here's the video for "Dead End" 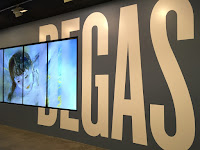 The NGV's Melbourne Winter Masterpieces focused on French artist Edgar Degas this year. The exhibition Degas: A New Vision features more than 200 of his works, including paintings, drawings and sculptures. While he was associated with French Impressionism, Degas preferred to refer to himself as a Realist.

Most of Degas' work focused on everyday people and portrayed the reality of what was happening behind the scenes and out of the spotlight. He immersed himself in different worlds and repeatedly returned to similar themes throughout his career such as dancing, horse racing and female nudes. His works ranged from detailed oil paintings to more abstract and unfinished looking pastel drawings. 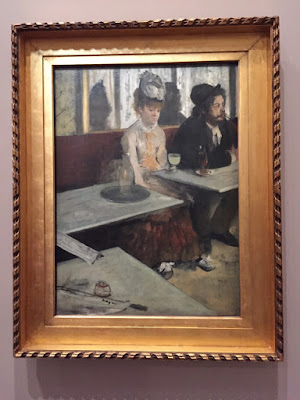 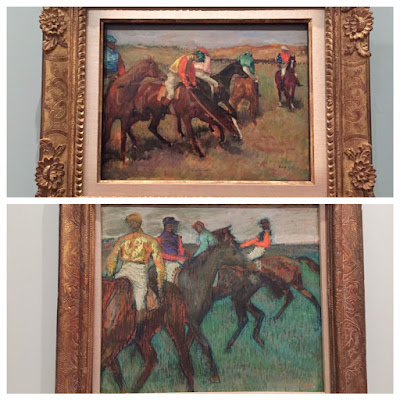 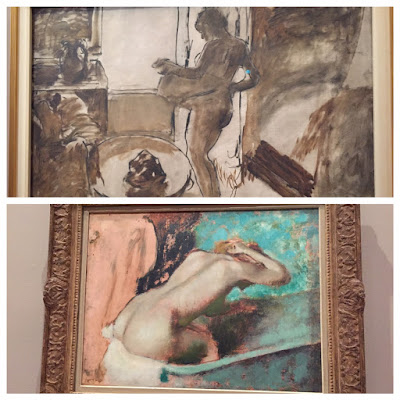 Degas is probably best known for his paintings and pastels of ballerinas, and they featured prominently throughout the exhibition. His focus was often on rehearsals and the backstage world of the supporting dancers. 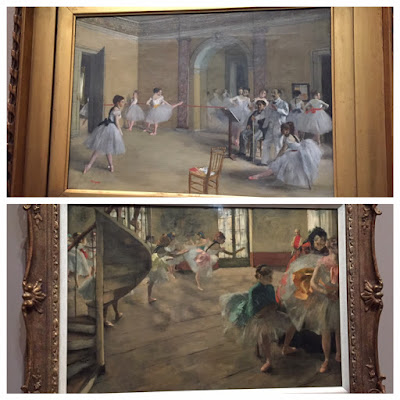 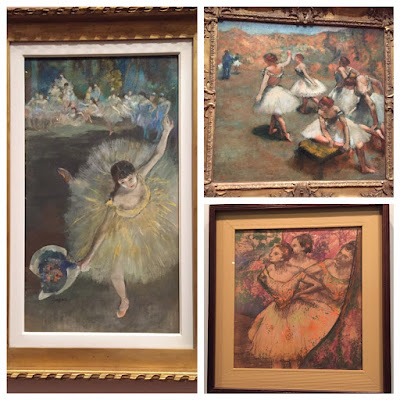 The exhibition also gives a really good history of both Degas' career and the historical times he was working and living in. Degas had issues with his eyesight, which got worse as he aged. I also had no idea he was anti-Semitic, which was brought to the fore through the Dreyfus affair in the late 1890s and early 1900s and resulted in him becoming alienated from many of his friends. Degas: A New Vision runs for one more week at the NGV and closes on 18 September 2016.
Posted by Nicole at 6:11 PM No comments:

Email ThisBlogThis!Share to TwitterShare to FacebookShare to Pinterest
Labels: exhibition

It's been a couple of years since Slow Dancer (aka Simon Okely) released his debut album, so it was exciting to see the announcement for a last minute semi-secret show occurring tonight at Some Velvet Morning in Clifton Hill. This was my first time at the venue, which was a small, intimate space the size of a living room.

DXHeaven (aka Nicholas Lam) opened the evening by playing solo on piano and then electric guitar for his last two songs. It was a lovely set of stripped back music where Nicholas' soulful voice shined through.

A clean shaven Slow Dancer then took to the stage, joined by Nicholas Lam on bass and Robert Bassey on drums. The set list was a mix of old and new songs as Simon tested out some of the tracks he has been working on for his next release. The new material sounded great and continues the chill Slow Dancer vibe and excellent guitar work we've all come to know and love. It was good to hear some old favorites played such as "Took The Floor Out," "Leave It To Me" and "Cornerstone." We also got treated to the new single "Don't Believe" where Simon invited old Oh Mercy bandmates Eliza Lam and Annabel Griggs up to sing backing vocals. It was such a nice opportunity to get a glimpse of these new songs, which I hope see the light of day sooner rather than later.
Posted by Nicole at 11:40 PM No comments: 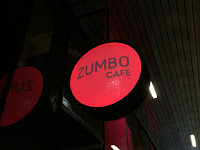 To celebrate Mary's birthday yesterday she gathered together a group of friends to attend high tea at Adriano Zumbo's Fancy Nance salon in South Yarra. High tea is available in the venue from Friday through Sunday with three different menu options and price points:
- Sconti: $15
- Pretty Flamingo: $45
- I'm So Fancy: $65

Mary and I both chose the three course I'm So Fancy menu to get the full experience. A Zumbo high tea is a bit different to others as it is more of a degustation menu than sweets tower, and they start with the sweet items and finish with savory.

The first course featured a spiced pear strudel verrine, malted milkshake macaron, rhubarb crumble with custard, strawberry tart, and a mandarin, white chocolate and macadamia cake. My favorites from this course were the verrine and rhubarb crumble due to their strong flavors. 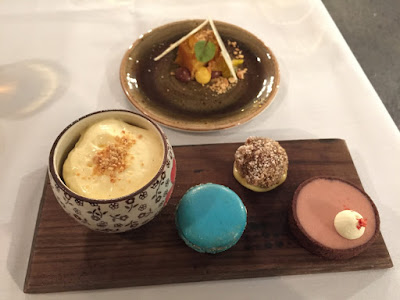 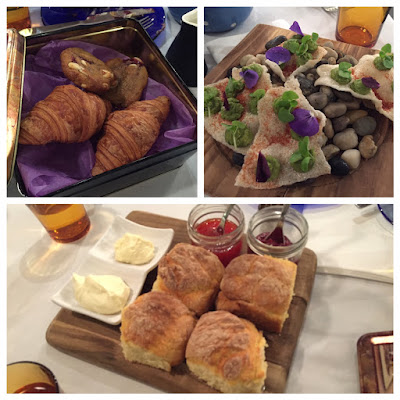 Our final course was all savory dishes with a carrot, orange and ginger soup with roasted pumpkin seeds, mac & cheese croquette with bacon schmear, and smoky pulled pork shoulder on a scone base topped with pickled onions. From this course the soup was a clear standout with its full and robust flavors. 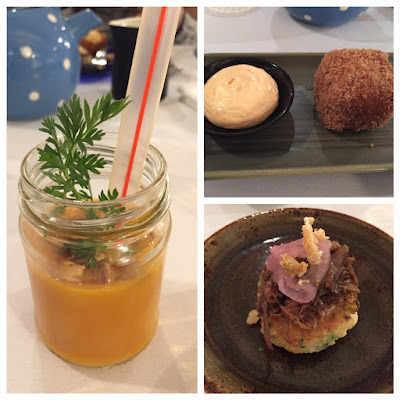 Overall the high tea was good but not mind blowing. There were a few standout dishes, but overall I would have preferred more sweet options to choose from.
Posted by Nicole at 7:25 PM No comments:

Last night L-FRESH The LION brought his tour in support of his second album Become to the Northcote Social Club. Opening the evening was spoken word artist and slam poet Sukhjit. She spoke about Sikh identity, dealing with sexual harassment, and loving your body and yourself. There were lots of snaps for the truth she told.

Omar Musa was up next and played a fantastic set full of songs from his excellent EP Dead//Centre. Joined by DJ B.Two on the decks and rapper Mantra for a guest appearance, Omar brought great energy and passion to the songs "Dead Centre," "The Razor's Edge," "Freedom" and "The Fisherman Song," where he joked he's the only person rapping about Southeast Asian fishermen. He has such a strong voice and presence on stage, and finished off the set with my favorite track off the EP, "Lak$a," which had the whole room jumping.

MC Mirrah made sure everyone was hyped and ready for L-FRESH The LION before he joined DJ MK-1 and the full band onstage. They started with "Pray For Me" and then went into one of my favorites "Get Mine." L-FRESH played songs from both his albums and the whole show was filled with lots of good vibes. He got introspective on "Faithful," "The Time Has Come" and "unBECOME" before bringing up the energy with "One," "Takeover," "1 in 100,000" and "Hold Up," which featured surprise special guest Remi Kolawole rapping his verse in the song. L-FRESH also referenced his Punjabi ancestry with the track "Never Alone" and in the encore as everyone came out on stage to finish the night with "Balle Balle." I had such a great time at this show and really appreciated the positive energy that each artist and the crowd brought to the evening.