Tonight a group of us headed up to ...don't tell tom for some improv comedy. The improvisation troupe Impro Melbourne put on the show, and it was quite funny. In the first act they played the game "More or Less." One person was the director of the scene, and as the scene progressed he/she asked the audience if they would like it to continue (more) or stop (less). In the second act a different set of members performed a longer improv piece based off of ideas from the audience. The suggestions were a marriage based on immigration, romance, a road trip, documentary, and sci-fi. Members would "tap" in and out of scenes, which would shift the location of things and characters abruptly at some points. At the beginning it was a bit disjointed as they introduced everything, but they actually managed sew their stories together by the end of the piece. It was really well done.

Unfortunately while we were in the comfy warm environment of ...don't tell tom, the heavens finally opened up (the forecasters had been predicting rain all weekend) and we had to deal with pouring rain and wind on the walk back home. The bottom half of my jeans were soaked, but at least my umbrella didn't turn inside out.
Posted by Nicole at 9:53 PM No comments:

Email ThisBlogThis!Share to TwitterShare to FacebookShare to Pinterest
Labels: comedy

I'll Be Home For Christmas

Forget having to celebrate Christmas in July here in Australia to get the wintry experience. I've just booked my flights to the States so that I can have a proper, cold weather Christmas and New Year's with my family and friends. I won't be missing out on the mulled cider this year. I'll be back in the Bay Area from December 21st - January 8th, so if you are in town, I hope to catch up with you. Who knows- I may even make a trip down to Southern California as well.
Posted by Nicole at 5:25 PM 3 comments:

It's summertime in the USA, so that means only one thing- Big Brother is back on the air! I'm so disappointed I am not there to watch it because this summer is all about the BB All-Stars. The public voted for 6 people from seasons 1 - 6 to go back in the house, with producers picking the remaining 8 people.

Even though I can't watch the show on tv here, I am following along on the internet. Having YouTube around this year has completely transformed the viewing of this show because so many people are throwing up bits from the live feeds. And thankfully for me, people are also putting the broadcast episodes up online because even though CBS has the episodes available for free on their website, I can't watch them because I'm outside the US.

Many of my favorites have made it back into the house, including Kaysar, Janelle, and evil Dr. Will. The game play is going to be so full-on this summer it will be interesting to see who makes it to the end. Allison has already be voted out of the house, and everyone seems to be gunning for the BB6 cast. Thankfully Kaysar won Head of Household this week, so at least they are all safe (for the moment).

I wish the Australian Big Brother was more like the US version- I find the game play and strategy so much more interesting to watch. Here they can't even discuss nominations and "playing the game" seems to be frowned upon in the house. The US version also seems to have a much more diverse group of people- differing ethnicities, ages, sexual orientations and religious backgrounds have been represented throughout the seasons. Diversity in casting makes a more watchable show. I wonder, considering all the controversy from this year, if the Australian producers will make some big changes for their next season. I sure hope they do.
Posted by Nicole at 9:29 PM No comments:

Tonight Michelle and I headed over to North Melbourne to wish Adrian farewell as he moves to Los Angeles for his new job in the physics department at UCLA in a week. We started the evening with dinner at Rubicon. Donna and Brenton were there when we arrived, so it was nice to catch up with them. I had the roasted pumpkin pizza with fetta cheese, spinach and pine nuts. For dessert I ate the crepes filled with vanilla ice cream and topped with chocolate sauce and peanuts. Adrian's friend had a book for everyone to sign, so I wrote about 4 pages of tips for him when he arrives in LA. After dinner we moved down the street to Rrose Bar for drinks and conversation. There was quite the turnout to send Adrian off. We said our goodbyes and headed for home around 11:30 pm. If any of you LA people would like to show Adrian around or have some tips I can pass on to him, please get in touch with me.
Posted by Nicole at 11:58 PM No comments:

Email ThisBlogThis!Share to TwitterShare to FacebookShare to Pinterest
Labels: friends

The lure to Myer was hard to resist- ads for a "History Making Clearance" beyond anything they have ever done before. Myer has been bought by someone else, so they are clearing out lots of their stock. Michelle and I decided to meet at the city store in Bourke Street Mall after work and see what bargains could be had. It was an absolute zoo in the store as many other people had the same idea. We started in fragrances, then worked our way through the accessories, shoes, clothes, kitchen and bath departments. Michelle found some good stuff to buy, but I didn't see anything that screamed "buy me" so my wallet stayed in my bag. It was like a feeding frenzy in some of the departments, which was a bit overwhelming (this was the first day of the sale). After a while we decided to escape the madness and headed to Mekong on Swanston Street for Vietnamese pho and spring rolls. It was nice to sit down and enjoy a yummy dinner before heading home.
Posted by Nicole at 9:41 PM No comments: 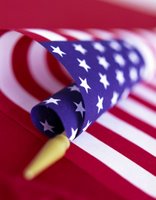 Happy 4th of July to all my American friends and family. While you get to enjoy fireworks, yummy barbeques, and the warm glow of summer, I worked today in chilly Melbourne. It's interesting being in another country for the 4th, especially one that is populated with monarchists. Can't get overly excited or you might offend them. I also think that being overseas is when you really start to identify with your home country. I can't escape being "American" here. It's funny because in the States you identify with the ethnic background of your ancestors, but here being American is its own ethnicity. I get this odd sense of patriotism that I definitely don't have when I'm home. Who knew it would take being half way around the world to have some pride in where you're from?

A fogless Fourth in San Francisco (very rare!)
Posted by Nicole at 8:54 PM No comments:

Ben is back in town for a few days doing rehearsals with Rogue Traders before they head off to the UK and US for some shows, so we decided to meet up for dinner. I walked down to his hotel after work and as I got there he was getting his room upgraded to one of the penthouse suite apartments. The place was huge- probably three times the size of my apartment. It was kind of funny. We decided to have dinner at il Solito Posto, an Italian restaurant in an alley off Collins Street. The food was delicious. I had linguine with calamari and napoli sauce, and Ben had spaghetti bolognese.

After eating we rushed back to the hotel to catch Big Brother. As many of you know, I find Big Brother to be very addictive, and the Australian edition has been no exception. The rules are a lot different to the US version, and it's on tv here every night so I don't have to spend as much time online reading about what's going on in the house. This past weekend has been a very controversial one as John and Ashley were kicked out of the house by Big Brother for sexual misconduct (and rightly so). It's been all over the news here and overseas, with calls from politicians to yank the show off the air. However, I think the real issues are more societal and symptomatic of the laddish culture that exists in Australia. Of course, the politicians are choosing to ignore the bigger picture.

What is amusing though is that Ben was actually in the Big Brother house when John and Ashley got kicked out because Rogue Traders played a mini-concert for the housemates on Saturday night. This was before the housemates knew that the boys had been removed and would not be returning. John and Ashley are supposed to appear with Gretel Killeen (BB host) later tonight, so we'll see how apologetic they are about what happened. I'm not getting my hopes up.
Posted by Nicole at 9:20 PM 2 comments:

I have been meaning to post pictures of the inside of my apartment. I still have a few more little things to buy (mainly poster frames for my posters- ignore the white walls) but otherwise it is pretty much decorated. Enjoy! 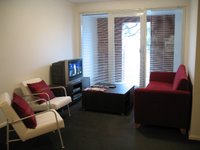 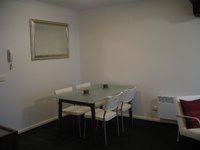 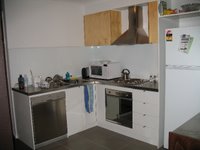 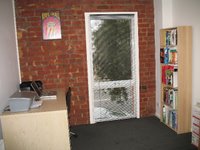 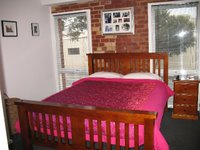 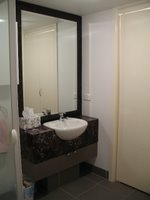 Posted by Nicole at 6:05 PM No comments: