Currently on at the Malthouse Theatre, Blackie Blackie Brown: The Traditional Owner of Death is the latest play by writer Nakkiah Lui. In this tale of revenge, Dr Jacqueline Brown (Dalara Williams) is on an archaeological dig for a company when she discovers a human skull that turns out to belong to her great-great-grandmother. After learning about the massacre of her ancestors on the site by four white men, she is tasked with avenging their deaths by killing all 400 of the men's descendants within 28 days.

The superhero Blackie Blackie Brown is born, and as she goes on her killing spree and gains notoriety across Australia, she has to deal with the reality that some of these descendants (all played by Ash Flanders) are more innocent than others. The set design is a slanted white floor and wall with numerous trap doors and hidden compartments, and it allows for the fantastic animations and projections by Oh Yeah Wow to shine through and bring the action hero/comic book vibe of the production to life. The play is really well done and despite its humor does not shy away from detailing the atrocities of the past and their continuing impact on the present.
Posted by Nicole at 11:37 PM No comments: 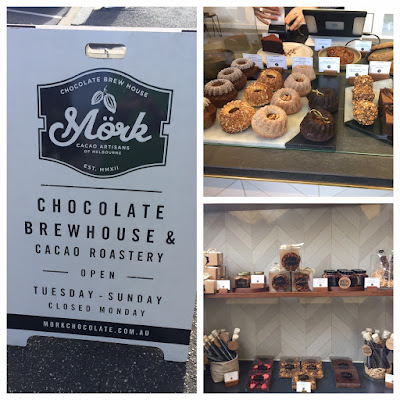 Mork hot chocolates are well known in Melbourne, and today I went to the Mork Chocolate Brew House in North Melbourne to try some of their signature drink creations. The Brew House is located in a converted 1950s-era bakery and has items for sale along with a cafe where you can sit down for a hot chocolate or something more inventive. 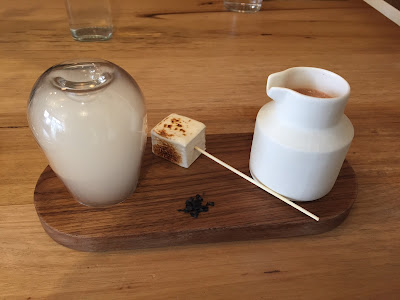 One of the signature drinks we ordered was the Campfire, which is made of 70% dark hot chocolate served with maple smoke, charcoal salt and a toasted house-made marshmallow. To drink it you turn over the glass with the maple smoke, pour in the hot chocolate, add some of the charcoal salt and then stir it together with the marshmallow. Like the name suggests, it tastes like a campfire. 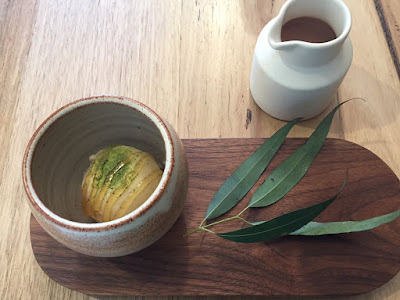 The Mork Chocolate Brew House is located at 150 Errol Street, North Melbourne and open from 9am-5pm on Tuesday through Sunday.
Posted by Nicole at 6:08 PM No comments: 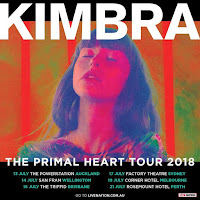 Tonight was Kimbra's sold out show at the Corner Hotel in support of her latest album Primal Heart. Opening the evening was Sydney electronic pop artist Exhibitionist (aka Kirsty Tickle). She and her band did a short set of songs, including one written with Sally Seltmann.

Kimbra's band members Spencer Zahn and Timon Martin came out on stage first before she joined them to launch into "Version Of Me." The set featured many songs off of Primal Heart, including "The Good War," 'Everybody Knows," "Human," "Like They Do On The TV," "Lightyears" and "Past Love," which she played on electric guitar as an homage to her early Melbourne days. For visuals they used many of the 3D computer animations from last year's Audio Electric show, which were projected onto the screens at each side of the stage.

Kimbra was so excited to be back in Melbourne and had lots of friends in the crowd. She played a few reworked versions of her older tracks during the evening with "Settle Down" (including a verse and chorus of "Somebody That I Used To Know") and "Two Way Street" off of Vows and "Love In High Places" off of The Golden Echo.  She finished the main set with a fantastic version of "Top Of The World," and then for an encore came out solo and closed with "Real Life." It was great to be able to see Kimbra live again, and she promised she'll be back sooner rather than later.

Here's the video for "Top Of The World" 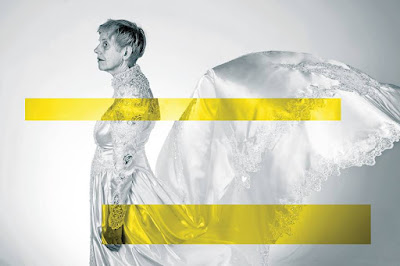 Tonight a group of us from work went to see the La Mama Theatre production of The Bachelor S17 E5 at the Brunswick Mechanics Institute in support of one of our workmates who acted in the performance. The production used transcripts from the show to bring to life one of those special two night Bachelor events focused on Sean Lowe's season of The Bachelor in the US.

The casting was inspired as they had different age ranges, body types and genders representing the female contestants. The guy who played host Chris Harrison was fantastic, and like a typical Bachelor episode, this one had a one on one date, a group date, a two on one date, and a dramatic rose ceremony. The Bachelor gave off some creepy and predatory vibes as he made out with many of the cast, and there was all the backstabbing and drama you would expect from the contestants. The staging was well done, with my absolute favorite part being the departure from the two on one date of drag queen Precious Cargo in a brilliant lip sync performance of Lana Del Ray's "Young and Beautiful" inspired by Sasha Velour's Ru Paul's Drag Race season nine finale performance. It was an entertaining evening and a fun way to portray the madness of The Bachelor.
Posted by Nicole at 9:53 PM No comments: 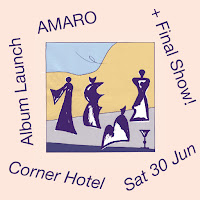 Last night was a bittersweet show at the Corner Hotel as much loved Melbourne band The Harpoons both launched their second album Amaro and played their final show together.

Opening the evening was Melbourne five piece electronic pop band Tetrahedra. Their songs were quite interesting and filled with complex time signatures and beats. The songs they played included some from their latest release SOMA, which is a visual EP project you can watch here. Next up was the Melbourne electronic duo SAATSUMA, who did a set of their atmospheric dance music that had the crowd moving.

The venue was really packed by the time The Harpoons took the stage for the last time. They started with the final song off Amaro "All I've Ever Done," and played a number of tracks off the album, including "Pressure," "Reassurance," "Do You Want My Love" and the standout song "Set Me Up To Fall." Band members did lots of thank yous to each other and their families, friends and supporters throughout the night. As always it was amazing to hear Bec Rigby belt out these songs, especially old favorites like "Ready For Your Love" and "Unforgettable," where they got a few friends and fans up on stage to sing along.

The absolute highlight of the night for me though was towards the end when they returned to their garage band roots and played some of their very first songs such as "Hey Girl," "Keep You Around," "Be My Lover, Be My Girl," "Garden City" and "Faith" to finish out the main set. For an encore we got one more song with "Swim My Baby" (used in a Big M milk commercial) and that was it from The Harpoons. It's been a joy to watch them grow and evolve their sound over these past ten years, and I wish each band member all the best for their future projects. You will be missed!

Here's an early live version of "Do You Want My Love"

Posted by Nicole at 2:57 PM No comments: